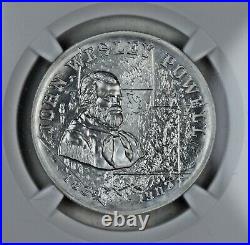 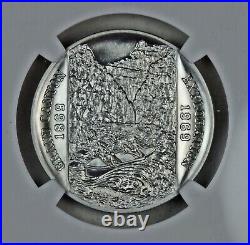 NGC MS69 - 1969 #32 JOHN WESLEY POWELL COMMEMORATIVE. 925 STERLING SILVER HERALDIC ART MEDAL. NONE HAVE EVER BEEN GRADED HIGHER!!! This is the 32nd in a series of sixty (60) medals made by Robert McNamara of Cleveland, Ohio between 1959 and 1978. Robert McNamara began making medals to fill the void created by the U.

Mint ceasing production of the Commemorative Half Dollars in 1954. There were also 7 medals made during those years that are referred to as "Special Issue" or "Occasional Medals".

Those medals are larger, heavier and all were done with a "medal reverse". Robert wanted to make his medals so that half dollar collectors could use the preexisting coin albums and hard plastic display holders similar to today's Capitol Plastic holders This medals made in 1959 were the same size and weight as the U. Half Dollar but done in sterling silver. 925 fine silver verses U.

This was done so the medals could not be used in vending machines and thus did no longer violate U, S, Anti-slug Laws. In addition to the silver medals Robert also created the first 7 medals in gold. It was just recently discovered that there were others produced but remained unknown for many years. Also unknown to most Heraldic Art collectors is the fact that there are at least 5 medals made during the 1959 to 1978 period that were struck in error and have a 180 degree rotated reverse or "medal reverse" instead of the "coin reverse" as they were intended to be.

The most common of these medals is the #28 New Orleans Medal. Far less were accidentally struck and released of the #15 New Jersey Medal.

There is one more silver issue that there may have only been the one to be accidentally released. That one was discovered in the medals that Robert had in stock when the passed away. There are also at least two #5 Boy Scouts produced in gold with the rotated "medal reverses". Robert also did some counterstamped coins, silver bars and rounds that he gave away at coin club meetings to new members as well as coin club medals and a Bicentennial Medal for the Olde Northfield Historical Society in Cleveland. All these items are largely unknown by most collectors and I will be listing some examples in the very near future.