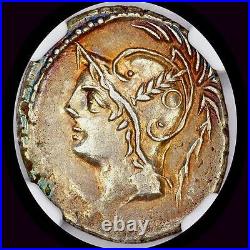 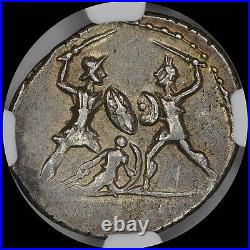 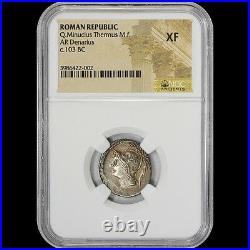 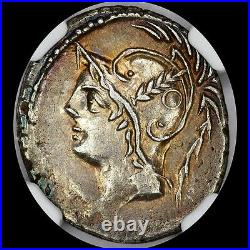 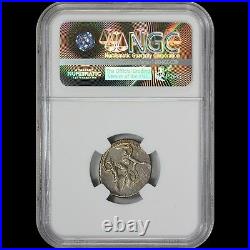 Head of Mars left, wearing crested helmet ornamented with feather at side and ring and volutes on bowl / Roman soldiers fighting Celt, protecting fallen comrade, Q. This 2119 year old Ancient Roman Republic AR Denarius records the brave deeds of the moneyers ancestor and namesake, Quintus Minucius Q. He was elected consul in 193 and given Liguria as his province. Liguria was currently held by hostile forces. From his command center in Pisa, he engaged in total war against the Ligurians.

His command was extended into the following year, during which time he defeated the Ligurian forces very near Pisa. He remained proconsul in Liguria 191190.

During such time it's believed he won the distinction of the corona civica, the second highest military award to which a Roman could aspire, by saving the life of a fellow soldier in battle through slaying an enemy on a spot not further held by the enemy army that day - this feat is depicted on the reverse. Mars , was the mythical Roman god of war. In earlier Roman history, prior to Rome's military expansions, he was a god of spring, growth in nature, fertility, and the protector of cattle. Mars is also mentioned as an earth-god, and this could explain why he became a god of death, and finally a god of war.