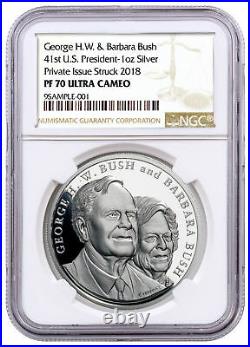 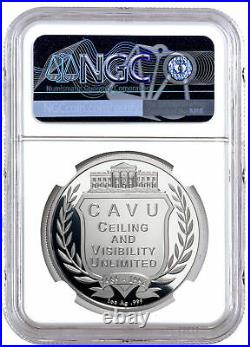 George and Barbara Bush Commem 1 oz Silver Medal 41st U. President NGC PF70 UC SKU56873. In 2018, Americans lost one of their most beloved couples as Barbara and George H.

Bush passed away just seven months apart, after being married for more than seven decades. The President was known for his service under President Ronald Reagan, as well as his leadership of a global coalition to remove Iraqi forces from Kuwait after their 1990 invasion of the Gulf nation. His wife Barbara was known for her work on literacy, especially adult literacy.

Now, the Commonwealth Mint is honoring the couple with a pair of silver medals. Part of a mintage of just 2,500 pieces, this medal was struck from one ounce of. 999 fine silver and is an exclusive product to Modern Coin Mart. Moving George and Barbara Bush Design by Numismatic Giant Don Everhart.

Don Everhart, the former U. S Mint Lead Sculptor who has over forty years of experience, both designed and sculpted this touching Medal for the Commonwealth Mint.

The obverse features an endearing image of the couple looking off to the right of the holder. They are both smiling warmly in an image that captures both their optimism and their love for each other. BUSH AND BARBARA BUSH, are inscribed along the rim. On the reverse is a plaque that George Bush kept in his office. It reads, CAVU CEILING AND VISIBILITY UNLIMITED. The expression is a reference to the weather conditions that Bush wanted as a pilot while flying from carriers during World War II. He referenced it in a letter to his children, saying that those were the conditions that he looked forward to for the rest of his life, thanks to their love. This coin is in perfect condition even as seen under 5x magnification according to the experts at Numismatic Guaranty Corporation (NGC), who awarded the piece their highest grade, Proof 70. It also bears particularly sharp contrasts between deeply mirrored fields and heavily frosted device, as evidenced by its Ultra Cameo certification. This Medal will be accompanied by a story card that was signed by its Creator and Sculptor, Don Everhart. Add this Exclusive 1 oz. Specifications for this George and Barbara Bush Commem 1 oz Silver Medal 41st U. George & Barbara Bush Portrait. We cannot make any price adjustments after the sale is complete. Product Photo Policy: MCM attempts to display product images shown on the site as accurately as possible. We take all of our photos in house and due to reflections on the mirrored or proof surfaces of a coin there may appear to be'black' when there is not. If a coin has a color on it at all it will be described as'colorized' in the description or title.

Due to the large inventory we sell, we use stock photos. Serial numbers will vary from the image shown unless specifically stated in the product listing that the item pictured is the item you will receive. INTERNATIONAL ORDERS POLICY: We are accepting international orders from select countries. These charges are the customer's responsibility.

However, we cannot guarantee this due to the volume of orders we process each day. Beyond the 30-day return period, Company is under no obligation to accept return of any product, but may in its discretion do so pursuant to this policy, for up to one year from the invoice date. ModernCoinMart (MCM) was launched in 2004 and quickly set the standards for online sales of bullion, US coins and world coins. Join over 100,000 loyal customers and feel confident purchasing from a company that's spent a decade building a solid and stellar reputation trusted and recognized around the world.