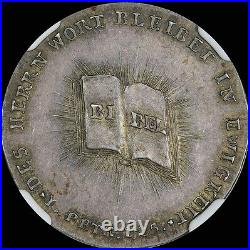 Historically: Struck during a very positive & stirring time of rising German nationalism. Germans citizens, especially the young, desiring to have a distinctly German Country- Imagine that. Of course as usual the elitist progressives shut them down. (sound familiar) Solomon was right "no new thing under the sun".

On October 18, 1817, students from various German universities met at the Wartburg castle (located near Eisenach in Thuringia) to mark the 300th anniversary of the beginning of the Reformation and the fourth anniversary of the Battle of the Nations at Leipzig. As Martin Luthers place of refuge in 1521-22, the Wartburg was regarded as a symbol of German nationalism. The gathering, which included approximately 500 students and a number of professors, was a protest demonstration against reactionary politics and the mini-state system. Instead, participants favored a German nation-state with its own constitution.

Among the members of Landsmannschaften [regional associations], the demand for national unity had always been particularly strong. This demand found cogent expression when the first student fraternity [Burschenschaft] was founded by Jena students in 1815.

This new type of association one that envisioned the unification of all students at a given university replaced the old Landsmannschaften and functioned as a model for German unity. He three-hundredth Reformation anniversary, in 1817 , was the game changer. Shortly before, in 1806, Napoleon had dissolved the Holy Roman Empire, and the influence of the American and French revolutions was in ascendance. During the preceding century, the congeries of movements and ideas we call the Enlightenment had effected a steady mutation in how Europeans remembered the Reformation. For philosophes and enlightened Protestants alike, the Reformation had become less an act of religious recovery than a catalyst toward the path of bourgeois liberties and civilizational progress.

Now, Roman Catholicism was less a false church, than a historial impediment to true christian progress. The early stirrings of nationalism, not least in German lands, were also positively apparent both before and during the 1817 commemorations. Themes of liberty and progress in particular peppered the homilies and orations from 1817. As dean of the University of Berlins theological faculty, ­Friedrich Schleiermacher gave an address on November 3, 1817 , in which he praised the Reformation for introducing the scholarly spirit into theology, without which it would slip back into Catholic dogmatism.