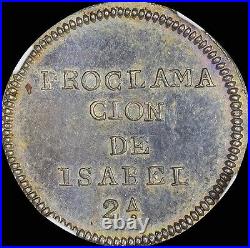 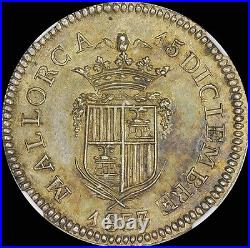 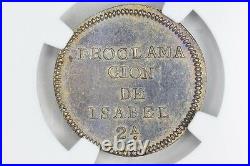 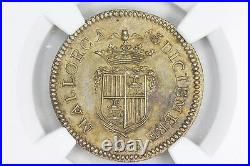 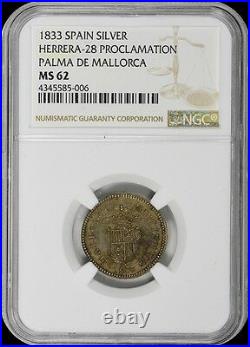 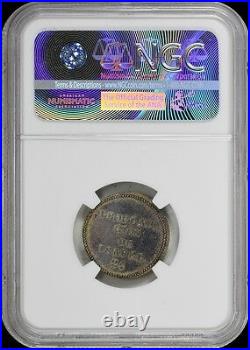 A VERY NICELY TONED 1833 ISABELLA II "HERRERA-28" PROCLAMATION MEDAL! A " FINEST & ONLY " AT BOTH NGC & PCGS! THE ONLY ONE GRADED AT NGC, " TOP-POP ". A " FINEST KNOWN " AND " ONE & ONLY " HERRERA-28 PROCLAMATION SILVER MEDAL AT BOTH PCGS & NGC! BEAUTIFUL OLD WORLD VIBRANT ROYALE BLUES , COOL STORM BLUES , LEMON-LIMES & ANTIQUE SILVER GRAYS! A CRISPLY STRUCK EXAMPLE WITH FULLY FORMED DENTICLES! A LOVELY NUMISMATIC PIECE OF SPANISH HISTORY; ANNOUNCING TO THE WORLD THE NEW QUEEN OF SPAIN & CELEBRATING HER ASCENDANCY TO THE ILLUSTRIOUS THRONE OF SPAIN! She was Spain's first true constitutional monarch during a period of growing social and political conflicts.

Born in Madrid on Oct. 10, 1830, Isabella was the daughter of Ferdinand VII of Spain and Maria Cristina of Naples.

Her uncle Don Carlos refused to recognize her right to the throne, and after the death of Ferdinand in late 1833 a bitter civil war broke out between the conservative elements, who supported Don Carlos, and the liberal groups, who supported the young princess and her mother, the Queen Regent. The Carlists were defeated in 1839, but the following year Baldomero Espartero, a liberal and the most powerful general in the country, forced Maria Cristina to leave Spain.

Three years later, the conservatives overthrew Espartero and his liberal supporters and on Nov. 8, 1843, had 13-year-old Isabella declared legally of age and crowned queen. Isabella's education had been meager; she could scarcely read and was by all accounts relatively ignorant. But she was highly attractive and utterly charming.

Between 1843 and 1868 Isabella reigned but did not rule. During most of this period Spain was governed by a coalition of civilian conservatives and army generals. 10, 1846, Isabella married her cousin Francisco de Asis. Now an attractive 16-year-old, she was generous, friendly, fond of dancing, and amorous, and the timid and effeminate Francisco was a great disappointment to her.

On the day after the wedding he moved out of the Queen's quarters, and her first lover, the handsome Gen. He was to be the first of many, until her active sex life (or what an English observer called her "terrible constitutional malady") was the talk of all Europe.

Yet she considered herself a devout Catholic and was very much under the influence of the superstitious and often fanatical nuns and monks who surrounded her at court. Isabella's scandalous private life, her antiliberalism, and Spain's economic crisis of 1866 brought about a popular revolution in September 1868. Isabella fled to France, and, on June 25, 1870, she abdicated in favor of her son Alfonso XII.