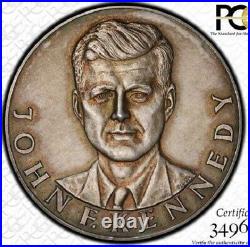 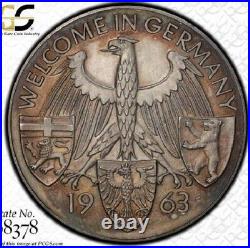 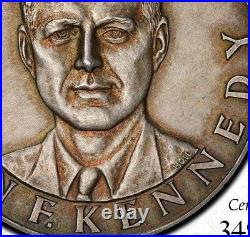 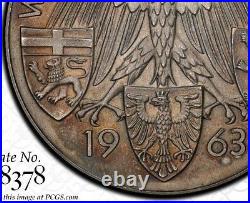 PRESIDENT OF THE UNITED STATES OF AMERICA! 1963 JOHN (JACK) FITZGERALD KENNEDY " WELCOME IN GERMANY " MEDAL! "FINEST" & "ONLY ONE" AT BOTH NGC & PCGS! NO OTHER IN ANY GRADE AT BOTH PCGS & NGC! VERY NICE ORIGINAL TONING OF GLOWING GOLDS AND SUBTLE BLUE SKIES! A VERY WELL STRUCK & BOLDLY DETAILED PIECE OF SPLENDID GERMAN NUMISMATIC ART WORK! IT IS THE ONLY ONE WE HAVE EVER SEEN IN ANY CONDITION!

FOR THE VERY FESTIVE VISIT OF UNITED STATES PRESIDENT JOHN F. KENNEDY IN JUNE 1963 TO BERLIN GERMANY, PROFESSOR ALBERT HOLL DESIGNED THIS VERY SPECIAL "MATTE" FINISH COMMEMORATIVE SILVER MEDAL. PORTRAIT THAT IS SOMEWHAT HAUNTING & VERY ALIVE LOOKING. HE APPEARS TO BE STARING STRAIGHT INTO YOUR EYES, WITH A LOOK OF SLIGHT PLEADING APPEAL. PROFESSOR HOLL MYSTERIOUSLY CAPTURED A LOOK OF " THEY KILLED ME " 5 FULL MONTHS "BEFORE" THEY ACTUALLY ASSASSINATED HIM.

SIGNED BY "HOLL" AT LOWER OBVERSE KENNEDY BUST. STRUCK ON A LARGE SPECIAL "MATTE" FINISHED SILVER PLANCHET OF 39.5 MM DIAMETER, LARGER THAN A U. THE REVERSE DISPLAYS A BEAUTIFUL GERMAN FEDERAL EAGLE AND THREE COATS OF ARMS OF BONN, BERLIN AND FRANFURT, GERMANY. THE SPECIAL " WELCOME IN GERMANY " J.

PRESIDENTIAL SILVER MEDALS WERE COINED AT THE OLD MINTS IN STUTTGART & KARLSRUHE GERMANY. THEY WERE ONLY AVAILABLE UPON DEMAND TO PAYING CUSTOMERS WHOM SOUGHT THEM OUT AT THE TWO MINTS. THIS (JUNE 1963) WAS A VERY SPECIAL OCCASION FOR PRESIDENT KENNEDY & GERMANY, HE HAD AN ADMIRATION OF THE GERMAN PEOPLES THAT DATED BACK MANY, MANY YEARS PRIOR. On June 30, 1937 John F. Jack Kennedy embarked on a two-and-a-half-month tour of Europe with his friend Kirk LeMoyne Lem Billings aboard the S. They both kept diaries documenting, in words and pictures, their adventures, mishaps, and observations along the way. Diary excerpt from LEM: August 17, 1937 Innsbruck Munich "Hitler seems very popular here you cant help but like a dictator when you are in his own country as you hear so many wonderful things about him and really not too many bad things". Kennedy juggling in Nuremberg, Germany, 20 August 1937 Lems caption: Jugglin Jack.

Kennedy openly admired Nazi Germany when he toured the country as a young man, according to a new book marking the 50th anniversary of his historic 1963 visit to Cold War West Berlin. The views once held by one of Americas most esteemed presidents, who won Berlin's heart in 1963 when he declared Ich bin ein Berliner , are recorded in diaries and letters Kennedy wrote on three visits to Germany in 1937, 1939 and 1945. After visiting Hitlers bomb-damaged Bavarian Berghof residence and his Eagles Nest mountain retreat, Kennedy noted in his diary.

Anyone who has visited these places can imagine how in a few years, Hitler will emerge from the hate that now surrounds him and come to be regarded as one of the most significant figures ever to have lived. He adds: There was something mysterious about the way he lived and died which will outlive him and continue to flourish. He was made of the stuff of legends.