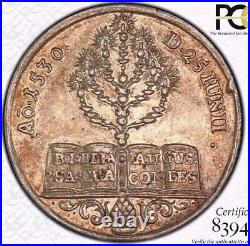 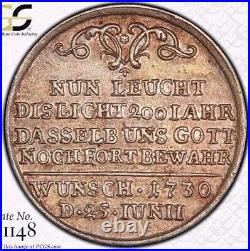 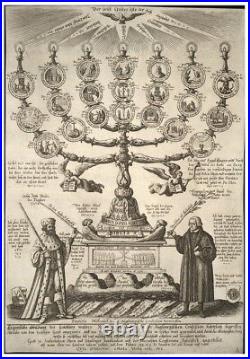 BELOW: The Illustration of the first 21 articles by Wenceslas Hollar. During 1530, emperor Charles V summoned the German princes to a Diet in Augsburg, Germany to put an end to ecclesiastic dissensions.

Each German prince was asked to state in writing in German and in Latin his religious opinions and the ecclesiastic abuses to be corrected. The prince elector of Saxony set Melanchton to the task, as he knew the man was moderate, and still hoped to come to an agreement with the catholic princes. It was then submitted to Martin Luther who gave total approval in these words I like it very much and would not wish to correct or modify it.

Moreover it would not be appropriate as I cannot tread so swiftly. The other evangelical princes and delegates from cities each brought a draft Declaration of Faith. They determined to have only one declaration, and thus Melanchtons Confession of Faith was signed by all the Lutheran princes and submitted in the name of all the evangelical German states.

The foreword was an an address to the emperor stating the wish of evangelical princes to come to an agreement with catholic princes, and asking for a christian council. The first part deals with doctrinal matters. It shows how the protestants restore the genuine doctrine of the universal Christian Church through the Scriptures and Fathers of the Church. The second part deals with practices to be modified or already modified in the newly reformed states -namely the Eucharist, priests marriage, mass, confession, food instructions, monastic vows, & bishop's power. The first 21 articles of the Augsburg Confession set forth Lutheran doctrine in order to demonstrate that they dissent in no article of faith from the Catholic Church.

The remaining seven articles discuss abuses that had crept into the Western church in the centuries immediately preceding the Reformation. As for the Catholic princes they refused to submit their profession of faith. They claimed they did not need to justify their standpoint as they remained true to the Christian faith. They forced Charles the Fifth to side with them.

So that instead of acting as referee, he asked Catholic theologians to rebuke the Augsburg Confession. As for the protestant German princes, they asked Melanchton to write an apology of the Augsburg Confession the emperor refused to accept. Of November 1530, the diet in Augsburg gave the following verdict : the Lutheran doctrine is disproved by the Scriptures.

Protestant princes were to submit within six months. Melanchton reworked on his Apology to prove that the Augsbug decree was a lie. It was published in 1531 and became the fourth symbolic book of the Lutheran Church along with Luthers two catechisms and the Augsburg Confession.

Throughout his life, Melanchton never stopped working on the Confession and its Apology. The 1540 edition was even signed by Calvin. As soon as 1555, the 1530 version of the Augsburg Confession became the official Confession of Faith of the Lutheran Church. The item "FINEST & ONLY @ NGC & PCGS MS 62 1730 AUGSBURG CONFESSION MEDAL FORSTER-99 TONED" is in sale since Sunday, August 8, 2021. This item is in the category "Coins & Paper Money\Exonumia\Medals".