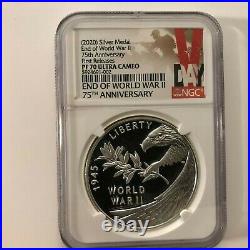 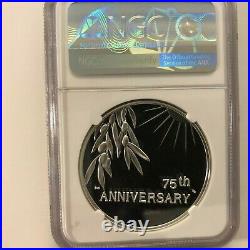 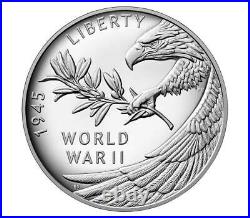 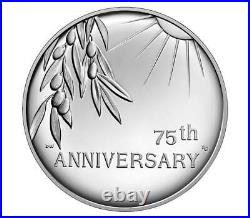 End of World War II 75th Anniversary Silver Medal PF 70 Ultra Cameo First Release. We pause to remember and honor those Americans who fought one of the greatest threats our country and world ever faced. Whether here on the home front or on far-away continents and islands, the greatest generation rose to the occasion in spectacular and selfless fashion to meet the challenge and preserve our freedoms and way of life. Obverse (heads): This design features an eagle in flight grasping an olive branch, symbolizing peace, in its right talon. The design is inspired by the 1945 version of the Great Seal of the United States, where the eagle faces to the right, toward the olive branch. Inscriptions are LIBERTY, 1945, and WORLD WAR II. Reverse (tails): This design echoes the sun element on the obverse of the 1945 World War II Victory Medal. The sun from that medal has, 75 years later, risen to noon day brilliance. It shines on the olive branches. The inscription is 75th ANNIVERSARY.

This item is in the category "Coins & Paper Money\Bullion\Silver\Coins". The seller is "uniquewmadeprod" and is located in Princeton, New Jersey.