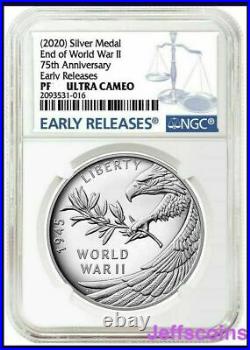 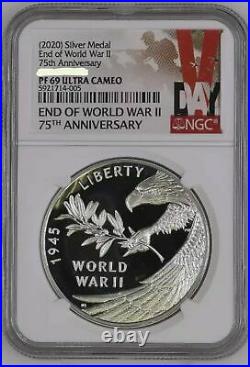 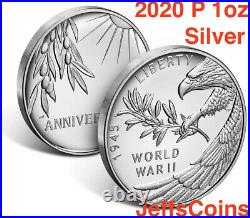 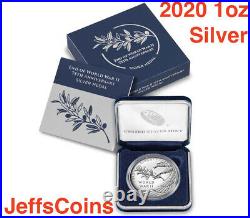 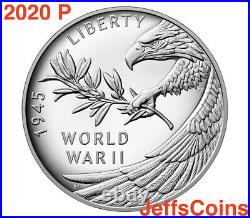 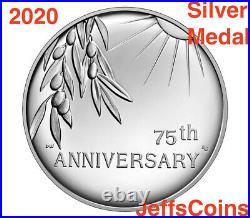 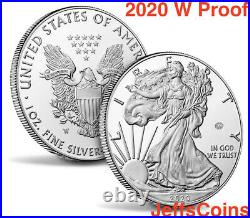 End of World War II 75th Anniversary NGC PF69. You will receive one of the Philadelphia. I will include the box if requested in your order.

Gallery Image #1 obverse reverse and image #2 #3 #4 shows the strike and packaging for this listing. Other coins in the gallery show you silver Eagle strikes, other optional surfaces and other silver issues that are available but not included. May be first releases or early releases label. Elease date is scheduled for November 9, 2020 and it will be almost impossible to get one.

Limited production of the silver and gold coin versions plus. With an unusual design means you need to.

To be one of the lucky ones with this very exclusive collector silver medal. We pause to remember and honor those Americans who fought one of the greatest threats our country and world ever faced. Whether here on the home front or on far-away continents and islands, the greatest generation rose to the occasion in spectacular and selfless fashion to meet the challenge and preserve our freedoms and way of life. Obverse (heads): This design features an eagle in flight grasping an olive branch, symbolizing peace, in its right talon. The design is inspired by the 1945 version of the Great Seal of the United States, where the eagle faces to the right, toward the olive branch.

Inscriptions are LIBERTY, 1945, and WORLD WAR II. Reverse (tails): This design echoes the sun element on the obverse of the 1945 World War II Victory Medal. The sun from that medal has, 75 years later, risen to noon day brilliance. It shines on the olive branches.

The inscription is 75th ANNIVERSARY. 1.598 inches (40.60 mm). You can also link below to add the expensive WWII 75th anniversary Silver Eagle. Blue letter link is for a Premium.

Version of the American Eagle One Ounce Silver Coin. You will receive the new 2020 W Anniversary Coin with Mint COA and box for each coin you order. With very limited mintage these coins will be for the serious proof collectors. 2020 W End of World War II 75th Anniversary American Eagle V75. These are the US Mint reeded edge collector West Point Proof 75th issues.

This is also the last Silver Eagle coin in this image series. Look for new images in 2021 (see gallery image #8 for a preview). With this low of mintage you may want to consider one of our graded offers.

2020 W End of World War II 75th Anniversary American Eagle Silver 20XF NGC PF70. This American Eagle One Ounce Silver Proof Coin incorporates a special privy mark on its obverse to symbolize the 75th anniversary of the triumph of World War II V75. The design outline of the privy mark represents the aerial view shape of the Rainbow Pool located at West Potomac Park in Washington, DC, that is now an integral part of the World War II Memorial, prompting somber reflection, appreciation, reverence, and hope for the thousands who visit each year.

This is not the bullion coin (they have no Mint mark) but a special premium collector S coin issue. Some coin and packaging images are shown from 2014 to 2019 as examples for our other listing links, you will receive a 2020 S only from the linked listing.

A Collectors Dream in Stunning Silver. Last year for this look of the Silver Eagle, 30 year run will change in 2021. US Mint issued 20 20 collector proof coin is packaged in a blue velvet, satin-lined presentation case and accompanied by a Certificate of Authenticity (COA). Our price may go up at any time based on availability, demand and silver prices.

Each Special Proof coin contains the standard one ounce of. They also may have a very unique feature when compared to other strikes, to start these are special planchets, special press setup, handled and packaged differently. Uncirculated and Proof 2020 issues from JeffsCoins have the standard reeded edge #34 unlike the special smooth edge lettering of the 30th anniversary.

These special United States Mint proof coins are extraordinarily brilliant, with sharp relief and a mirror-like background. Their frosted, sculpted foregrounds give them a special cameo effect. Proof blanks are specially treated, polished and cleaned to ensure high-quality strikes. Each coin also bears the S mint mark reflecting its striking at the United States Mint facility at SanFrancisco.

The perfect gift for any occasion, the 2020 American Eagle One Ounce Silver Proof Coin is also a collector favorite. The obverse (heads) features Adolph A. Weinmans full-length figure of Liberty in full stride, enveloped in folds of the flag, with her right hand extended and branches of laurel and oak in her left. The reverse (tails) features a heraldic eagle with shield, an olive branch in the right talon and arrows in the left. Each coin bears the S mint mark reflecting its striking at the San Francisco Mint and is packaged in a blue velvet, satin-lined presentation case accompanied by a Certificate of Authenticity. New 2 Troy Oz Proof. 2019 P Apollo 11 50th Anniversary.

The West Point Mint produces gold, silver and platinum bullion coins. Erected in 1937 as the West Point Bullion Depository, this was originally a storage facility for silver bullion and was nicknamed The Fort Knox of Silver. From 1973 to 1986, West Point produced cents, and in 1980 began striking gold medallions. Shortly afterward, approximately 20 billion dollars worth of gold was stored in its vaults, making it second only to Fort Knox for gold storage.

Today, it is also the major producer of gold coins. The red letter date for West Point was March 31, 1988, when it gained official status as a United States Mint.

Today, it is still a storage facility, but also manufactures, packages and ships gold and silver commemorative coins, and American Eagle Bullion coins in proof and uncirculated condition. Its Platinum Eagles have been very popular since their first issuance in 1997. In 2000, it struck the first ever Gold and Platinum Bi-Metallic Coin. Because of its extremely high security, the West Point facility does not offer public tours. Jeffs Coins information source US Mint. All coins share common designs and are curved. These coin is especially striking because of the large reflective fields. 2019 S Mint Proof Coins Early Release. 2019 P Apollo 11 50th Anniversary UNCIRCULATED Silver Dollar 1oz. Apollo 11 50th Anniversary 2019. This product is limited to 100,000 units.