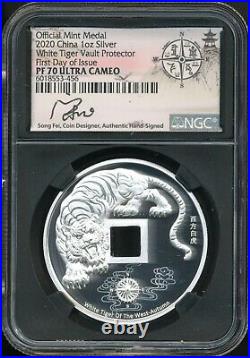 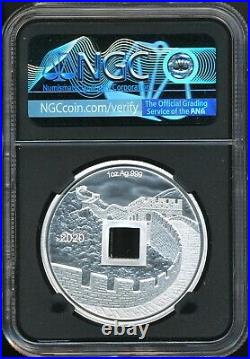 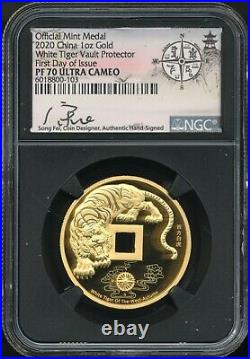 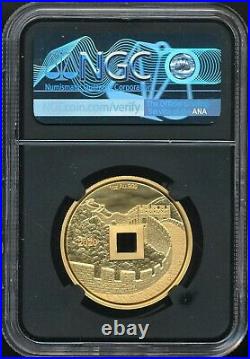 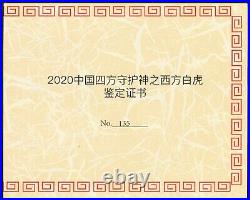 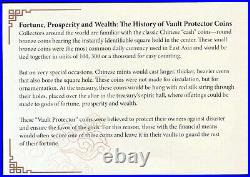 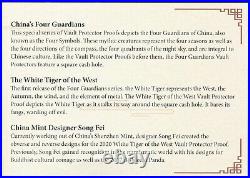 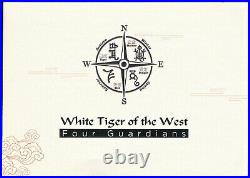 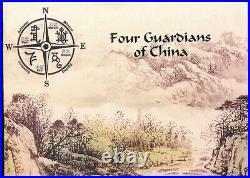 Both NGC PF 70 ULTRA CAMEO, First Day Of Issue. The NGC Labels Are Hand Signed By Song Fei, The Designer.

From the Four Corners of China, The Guardians Keep Watch. For more than 6,000 years, the mythic Guardians have stood watch over China. The White Tiger of the West, the Black Warrior/Tortoise of the North, the Azure Dragon of the East and the Vermilion Bird of the South represent not only the four directions of the compass, but also the four seasons. Now, in an exclusive series, each of the Guardians is being struck in China as a special Vault Protector Proof, starting with the White Tiger.

The White Tiger of the West. As the king of beasts in Chinese culture, the Tiger is often depicted with the pinyin character wáng, or King on its forehead. Over the centuries, this king became a mythological figure.

But the White Tiger is something different altogether. In Chinese mythology, a tigers tail would begin to turn white when it reached 500 years of age. As one of the Four Guardians, the White Tiger of the West, also known as Baihu, also represents autumn, or an aging of the seasons before winter. It was said that when the emperor ruled with absolute virtue and peace spread across the world, only then would the White Tiger appear. Lucky you the White Tiger is appearing a little early to protect your vault and collection! What is a Vault Protector? In East Asia, bronze cash coins were a centerpiece of local commerce. These classic round coins featured the iconic square hole in the center to allow specific amounts to be strung together and easily counted and transported.

On very special occasions, Chinese mints would cast larger, thicker, heavier coins that also bore the square hole. These coins were not made for circulation, but for ornamentation. At the treasury, these coins would be hung with red silk string through their holes, placed over the altar in the treasurys spirit hall, where offerings could be made to gods of fortune, prosperity and wealth.

These Vault Protector coins were believed to protect their owners against disaster and ensure the favor of the gods. For this reason, those with the financial means would often secure one of these coins and leave it in their vaults to guard the rest of their fortune. Certified Flawless and First Day of Issue (FDI) by NGC. Available in a number of enticing sets, these proofs are available certified and graded by Numismatic Guaranty Corporation (NGC) as flawless Proof 70 Ultra Cameo (PF70 UC) condition.

In addition, NGC has bestowed upon this coin the special First Day of Issue (FDI) designation, certifying that it was secured from the mint on the very first day of the mintage's release. Whats more, each NGC label will bear the hand-written autograph of designer Song Fei! Please See Photos To Appreciate Condition.

The item "2020 China The White Tiger Of The West 2 Medal Set Gold+Silver NGC PF 70 withCOA's" is in sale since Wednesday, November 18, 2020. This item is in the category "Coins & Paper Money\Coins\ World\Asia\China\PRC (1949-Now)". The seller is "oldworldcoinshop" and is located in McHenry, Illinois. This item can be shipped to United States, Canada.