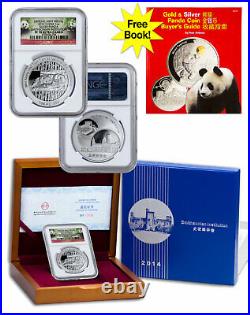 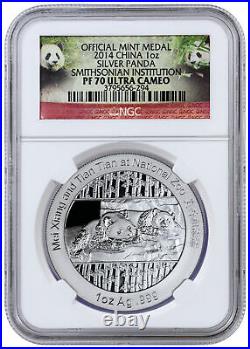 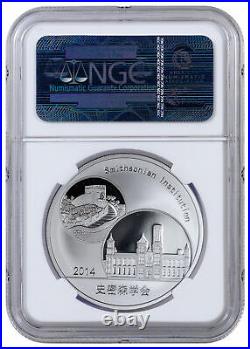 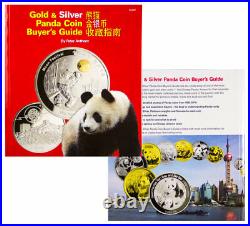 Giant pandas have been kept in the National Zoo since 1972 and this design features 2 that live there today. 2014 China Smithsonian Panda commemorative Silver Content.

This may not be part of the Silver Panda series per se, but it has the same composition. This commemorative contains 1 Troy oz. Size had a mintage limit of 500,000 pieces. NGC PF70 Ultra Cameo Smithsonian Silver Panda commemorative.

The China Silver Panda commemorative has a design that displays 2 giant pandas who currently reside at the National Zoo, Mei Xiang and Tian Tian. Mei Xiang and Tian Tian can be seen relaxing as they lay in a rocky area of their habitat. Both of these giant pandas are finely detailed, the texture of their coat is immediately visible to the naked eye. Above and below this scene is a border made of bamboo shoots.

The inscriptions on this side of the commemorative read "MEI XIANG AND TIAN TIAN AT NATIONAL ZOO, " and 1 oz. The opposite side of this commemorative depicts the Smithsonian Institution and the Great Wall of China in exquisite detail. This side is inscribed with the words "SMITHSONIAN INSTITUTION, " and 2014. Both sides of the commemorative have a beautiful proof finish that does a fine job of giving these detailed designs that visual pop.

The 2014 China Smithsonian Institution official mint commemorative had a limited mintage, and perfect graded specimens like this one are always scarce regardless of the total mintage. Add this NGC PF70 Silver Panda commemorative to your collection today. Specifications for this 2014 China Mei Xiang and Tian Tian Smithsonian Institution Official Mint Medal 1 oz Silver Proof Medal NGC PF70 UC (Panda Label) SKU36302. We cannot make any price adjustments after the sale is complete.

Product Photo Policy: MCM attempts to display product images shown on the site as accurately as possible. We take all of our photos in house and due to reflections on the mirrored or proof surfaces of a coin there may appear to be'black' when there is not. If a coin has a color on it at all it will be described as'colorized' in the description or title. Due to the large inventory we sell, we use stock photos. Serial numbers will vary from the image shown unless specifically stated in the product listing that the item pictured is the item you will receive. INTERNATIONAL ORDERS POLICY: We are accepting international orders from select countries. These charges are the customer's responsibility. However, we cannot guarantee this due to the volume of orders we process each day. Beyond the 30-day return period, Company is under no obligation to accept return of any product, but may in its discretion do so pursuant to this policy, for up to one year from the invoice date. ModernCoinMart (MCM) was launched in 2004 and quickly set the standards for online sales of bullion, US coins and world coins. Join over 100,000 loyal customers and feel confident purchasing from a company that's spent a decade building a solid and stellar reputation trusted and recognized around the world. That's the MCM way. 2019 China Sino-Russian Diplomatic Relations 30 g Silver Proof ¥10 Coin SKU58437. 2021 Australia Shipwreck Zeewijk Triangular 1 oz Silver Antq NGC MS70 FR.

This listing is currently undergoing maintenance, we apologise for any inconvenience caused. This item is in the category "Coins & Paper Money\Coins: World\Asia\China\PRC (1949-Now)". The seller is "mcm" and is located in this country: US.