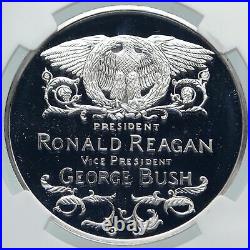 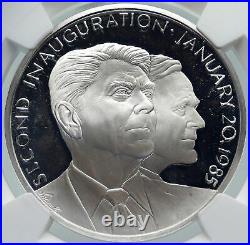 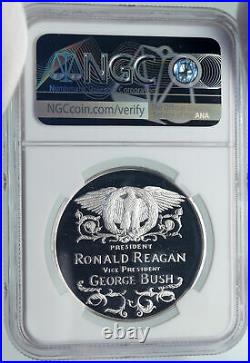 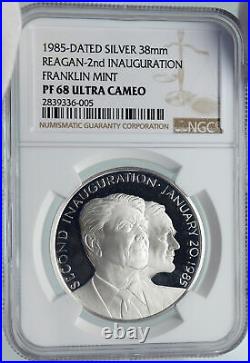 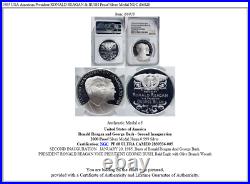 United States of America Ronald Reagan and George Bush - Second Inauguration 2000 Proof Silver Medal 38mm 0.999 Silver Certification: NGC. PF 68 ULTRA CAMEO 2839336-005 SECOND INAUGURATION. JANUARY 20, 1985, Busts of Ronald Reagan And George Bush. Ronald Wilson Reagan (February 6, 1911 - June 5, 2004) was an American politician who served as the 40th president of the United States from 1981 to 1989 and became a highly influential voice of modern conservatism. Prior to his presidency, he was a Hollywood actor and union leader before serving as the 33rd governor of California from 1967 to 1975.

Reagan was raised in a low-income family in small towns of northern Illinois. He graduated from Eureka College in 1932 and worked as a radio sports commentator. After moving to California in 1937, he found work as an actor and starred in a few major productions. As president of the Screen Actors Guild, Reagan worked to root out communist influence. In the 1950s, he moved into television and was a motivational speaker at General Electric factories.

In 1964, his speech "A Time for Choosing" earned him national attention as a new conservative spokesman. Building a network of supporters, Reagan was elected governor of California in 1966.

In 1980, Reagan won the Republican presidential nomination and defeated the incumbent president, Jimmy Carter. At 69 years, 349 days of age at the time of his first inauguration, Reagan was the oldest person to assume the U. Presidency, a distinction he held until 2017, when Donald Trump was inaugurated at age 70 years, 220 days.

Reagan faced former vice president Walter Mondale when he ran for re-election in 1984 and defeated him, winning the most electoral votes of any U. President, 525, or 97.6% of the 538 votes in the Electoral College.

It was the second-most lopsided presidential election in modern U. Roosevelt's 1936 victory over Alfred M. Landon, in which he won 98.5%, or 523, of the (then-total) 531 electoral votes. Immediately on taking office as president, Reagan began implementing sweeping new political and economic initiatives that were highly popular among conservatives but denounced by liberals.

Reagan won over enough conservative Democrats to pass his program through Congress. Economic conditions had deteriorated under Carter, with slow growth and high inflation. However conditions remained harsh until they finally turned as promised in time for his reelection in 1984. Over his two terms, the economy saw a reduction of inflation from 12.5% to 4.4% and an average real GDP annual growth of 3.6%. In his first term, he survived an assassination attempt, spurred the War on Drugs, and fought public sector labor unions.

In foreign affairs he denounced Communism and invaded the island country of Grenada after far-left elements took control. It represented a rollback of Communism that astonished the world. With the economy booming again, foreign affair crises dominated his second term. Major concerns were the bombing of Libya, the Iran-Iraq War, the Iran-Contra affair, and the renewed Cold War.

In June 1987, four years after he publicly described the Soviet Union as an "evil empire", Reagan challenged Soviet leader Mikhail Gorbachev to tear down this wall! , during a speech at the Berlin Wall.

He transitioned Cold War policy from détente to rollback by escalating an arms race with the USSR. He then engaged in talks with Gorbachev that culminated in the INF Treaty, which shrank both countries' nuclear arsenals.

Reagan began his presidency during the decline of the Soviet Union. The Cold War ended in October 1989 and Soviet communism suddenly collapsed in 1991. Roosevelt, and later Bill Clinton, as the highest ratings for departing presidents in the modern era. He was the first president since Dwight D. Eisenhower to serve two full terms, after the five prior presidents did not. Although he had planned an active post-presidency, Reagan disclosed in November 1994 that he had been diagnosed with Alzheimer's disease earlier that year. Afterward, his informal public appearances became more infrequent as the disease progressed. He died at home on June 5, 2004. His tenure constituted a realignment toward conservative policies in the United States, and he is an icon among conservatives.

Evaluations of his presidency among historians and the general public place him among the upper tier of American presidents. World-renowned expert numismatist, enthusiast, author and dealer in authentic ancient Greek, ancient Roman, ancient Byzantine, world coins & more. Ilya Zlobin is an independent individual who has a passion for coin collecting, research and understanding the importance of the historical context and significance all coins and objects represent. Send me a message about this and I can update your invoice should you want this method. Getting your order to you, quickly and securely is a top priority and is taken seriously here.

How and where do I learn more about collecting ancient coins? Visit the "Guide on How to Use My Store". For on an overview about using my store, with additional information and links to all other parts of my store which may include educational information on topics you are looking for. The item "1985 USA American President RONALD REAGAN & BUSH Proof Silver Medal NGC i86028" is in sale since Wednesday, September 2, 2020. This item is in the category "Coins & Paper Money\Exonumia\Medals".