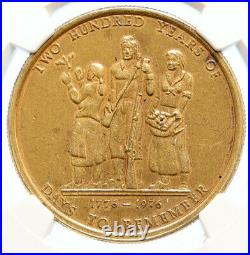 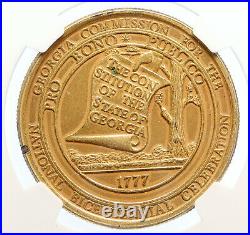 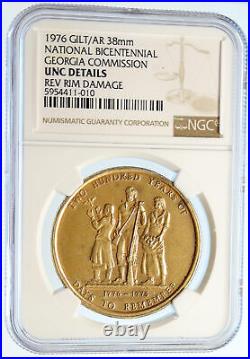 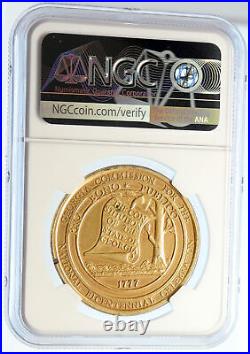 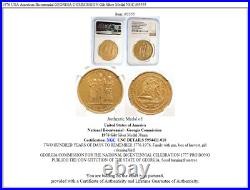 Item: i95555 Authentic Medal of. United States of America National Bicentennial - Georgia Commission 1976 Gilt Silver Medal 38mm Certification: NGC. GEORGIA COMMISSION FOR THE NATIONAL BICENTENNIAL CELEBRATION 1777 PRO BONO PUBLICO THE CON STITUTION OF THE STATE OF GEORGIA, Scroll hanging from tree. The United States Bicentennial was a series of celebrations and observances during the mid-1970s that paid tribute to historical events leading up to the creation of the United States of America as an independent republic. It was a central event in the memory of the American Revolution.

The Bicentennial culminated on Sunday, July 4, 1976, with the 200th anniversary of the adoption of the Declaration of Independence. The nation had always commemorated the Founding as a gesture of patriotism and sometimes as an argument in political battles. Historian Jonathan Crider points out that in the 1850s, editors and orators both North and South claimed their region was the true custodian of the legacy of 1776, as they used the Revolution symbolically in their rhetoric.

The plans for the Bicentennial began when Congress created the American Revolution Bicentennial Commission on July 4, 1966. Initially, the Bicentennial celebration was planned as a single city exposition (titled Expo'76) that would be staged in either Philadelphia or Boston. After 6½ years of tumultuous debate, the Commission recommended that there should not be a single event, and Congress dissolved it on December 11, 1973, and created the American Revolution Bicentennial Administration (ARBA), which was charged with encouraging and coordinating locally sponsored events. David Ryan, a professor at University College Cork, notes that the Bicentennial was celebrated only a year after the withdrawal from Vietnam in 1975 and that the Ford administration stressed the themes of renewal and rebirth based on a restoration of traditional values, giving a nostalgic and exclusive reading of the American past. World-renowned expert numismatist, enthusiast, author and dealer in authentic ancient Greek, ancient Roman, ancient Byzantine, world coins & more.

Visit the "Guide on How to Use My Store". For on an overview about using my store, with additional information and links to all other parts of my store which may include educational information on topics you are looking for. This item is in the category "Coins & Paper Money\Exonumia\Medals". The seller is "highrating_lowprice" and is located in this country: US. This item can be shipped worldwide.