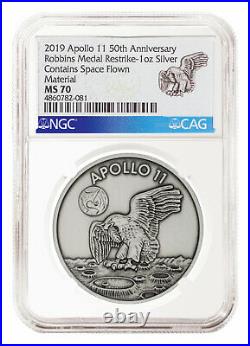 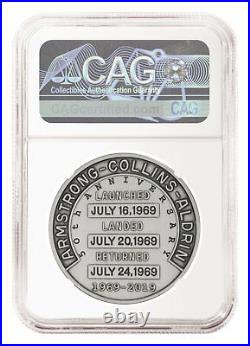 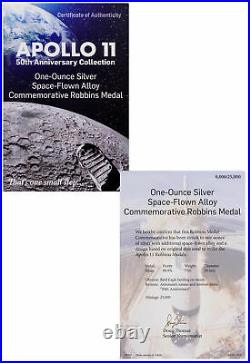 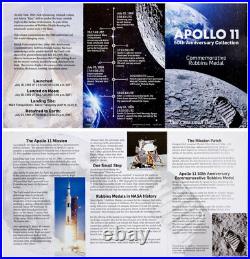 Celebrate the 50th Anniversary of the Apollo 11 mission with this 1 oz. Silver Robbins medal with Space Flown Alloy! Starting with the Apollo 7 mission in 1968, the Robbins Company of Attleboro, Mass. Collaborated with astronauts from each mission to create commemorative medallions that would make the journey into space with the NASA astronauts.

These medallions were only created for the crew and other members of NASA and the Astronaut Flight Office (AFO). 1969 is the year that NASA's successful Apollo 11 mission landed on the moon and marked the first time man had ever stepped on the moon's surface. Now a commemorative medal has been released in celebration of the 50th anniversary of the Apollo 11 mission, and is a recreation based on the dies used for the original Robbin medals carried by Neil A. Armstrong, Michael Collins and Edwin E.

Aldrin, Jr on their incredible voyage to the moon. Not only was this medal adapted from the original dies used to produce the original and historic 1969 medals, but its composition actually contains metal from spacecraft used on the Apollo missions! This metal was carefully filtered of any impurities and included in the antiquing solution that has been carefully hand applied! Featuring a replica of the original Apollo 11 Robbins Medal Designs.

Depicted on the obverse is the original Apollo 11 Robbins medal design: an American bald eagle landing on the moon, clasping an olive branch in its beak. "APOLLO 11" is inscribed in bold letters above the design. The reverse is also a near-complete replica of the back of the original Robbins medals. Graded Mint State 70 and specially packaged to celebrate the 50th anniversary of Apollo 11. This 1 oz silver medal was graded by the Numismatic Guaranty Corporation (NGC) and achieved the exquisite grade of Mint State 70 (MS70).

This grade ensures a well-struck, quality medal without any faults or imperfections even at 5X magnification. The coin is packaged and presented in a classy box!

Astronaut Names and Mission Dates. We cannot make any price adjustments after the sale is complete.

Serial numbers will vary from the image shown unless specifically stated in the product listing that the item pictured is the item you will receive. INTERNATIONAL ORDERS POLICY: We are accepting international orders from select countries. These charges are the customer's responsibility. However, we cannot guarantee this due to the volume of orders we process each day. Beyond the 30-day return period, Company is under no obligation to accept return of any product, but may in its discretion do so pursuant to this policy, for up to one year from the invoice date.

ModernCoinMart (MCM) was launched in 2004 and quickly set the standards for online sales of bullion, US coins and world coins. Join over 100,000 loyal customers and feel confident purchasing from a company that's spent a decade building a solid and stellar reputation trusted and recognized around the world. That's the MCM way.