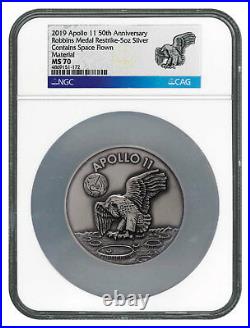 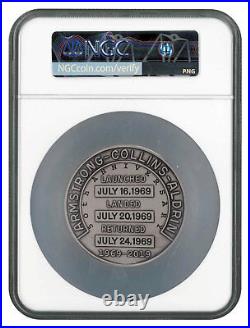 This 5 oz silver medal replicates the medals that the Robbins Company struck for the Apollo 11 mission. The original medals were only for those who were involved in the mission, but this medal is one of several released to mark the 50th anniversary of the historic voyage, which put man on the moon for the first time. This medal was struck by Sunshine Minting from 5 oz of. The mint purified alloy that was flown aboard an Apollo mission and incorporated the purified metal into the antiquing solution, meaning that alloy that was actually flown in space is part of this medal. Just 5,000 of these medals were minted, so many space enthusiasts will miss out on this unique opportunity to share in the fiftieth anniversary of this historic achievement. The obverse of this medal replicates the original medals, which feature the mission's patch. An eagle with its wings spread lands on the cratered lunar surface.

In the distance is the Earth, with Florida, home of the Kennedy Space Center from which Apollo 11 launched, at the center. The name of the mission, "APOLLO 11, " is inscribed at the top. On the reverse are key details about the mission and the event for which the medal was minted. The names of the astronauts on the mission, "ARMSTRONG - COLLINS - ALDRIN" arch along the rim, while "50TH ANNIVERSARY" is included just inside them. Perfect MS70 with Exclusive Robbins Label.

This medal received Numismatic Guaranty Corporation's (NGC's) highest grade, Mint State 70, which is reserved for pieces that are flawless as seen under 5x magnification. That grade is provided on an exclusive Robbins level, which bears an image of the eagle that appears on the insignia.

Astronaut Names and Mission Dates. We cannot make any price adjustments after the sale is complete. Product Photo Policy: MCM attempts to display product images shown on the site as accurately as possible. We take all of our photos in house and due to reflections on the mirrored or proof surfaces of a coin there may appear to be'black' when there is not.

If a coin has a color on it at all it will be described as'colorized' in the description or title. Due to the large inventory we sell, we use stock photos.

However, we cannot guarantee this due to the volume of orders we process each day. Beyond the 30-day return period, Company is under no obligation to accept return of any product, but may in its discretion do so pursuant to this policy, for up to one year from the invoice date.

ModernCoinMart (MCM) was launched in 2004 and quickly set the standards for online sales of bullion, US coins and world coins. Join over 100,000 loyal customers and feel confident purchasing from a company that's spent a decade building a solid and stellar reputation trusted and recognized around the world. That's the MCM way. Game of Thrones Dead Man Set Set of 7 Fantasy Coins Original Packaging SKU50165.