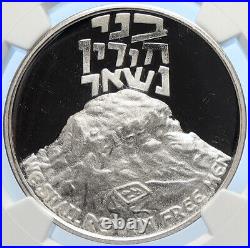 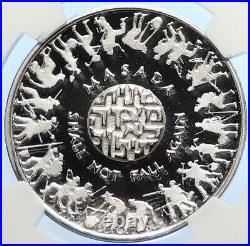 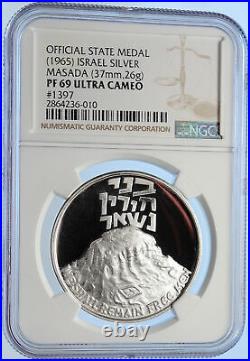 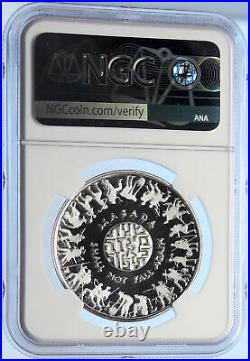 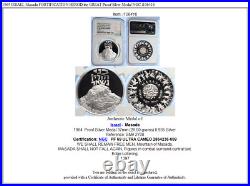 MASADA SHALL NOT FALL AGAIN, Figures in combat surround central text. Metsada, "fortress" is an ancient fortification in the Southern District of Israel situated on top of an isolated rock plateau, akin to a mesa.

It is located on the eastern edge of the Judaean Desert, overlooking the Dead Sea 20 km (12 mi) east of Arad. Herod the Great built two palaces for himself on the mountain and fortified Masada between 37 and 31 BCE.

According to Josephus, the siege of Masada by Roman troops from 73 to 74 CE, at the end of the First Jewish-Roman War, ended in the mass suicide of the 960 Sicarii rebels who were hiding there. Masada is one of Israel's most popular tourist attractions. The cliff of Masada is, geologically speaking, a horst. As the plateau abruptly ends in cliffs steeply falling about 400 m (1,300 ft) to the east and about 90 m (300 ft) to the west, the natural approaches to the fortress are very difficult to navigate. The top of the mesa-like plateau is flat and rhomboid-shaped, about 550 m (1,800 ft) by 270 m (890 ft). Herod built a 4 m (13 ft) high casemate wall around the plateau totalling 1,300 m (4,300 ft) in length, reinforced by many towers. The fortress contained storehouses, barracks, an armory, a palace, and cisterns that were refilled by rainwater.

Three narrow, winding paths led from below up to fortified gates. Almost all historical information about Masada comes from the first-century Jewish Roman historian Josephus. Josephus writes that the site was first fortified by Hasmonean ruler Alexander Jannaeus in the first century BCE. However, so far no Hasmonean-period building remains could be identified during archaeological excavations. Josephus further writes that Herod the Great captured it in the power struggle that followed the death of his father Antipater.

It survived the siege of the last Hasmonean king Antigonus II Mattathias, who ruled with Parthian support. According to Josephus, between 37 and 31 BCE, Herod the Great built a large fortress on the plateau as a refuge for himself in the event of a revolt, and erected there two palaces.

In 66 CE, a group of Jewish rebels, the Sicarii, overcame the Roman garrison of Masada with the aid of a ruse. After the destruction of the Second Temple in 70 CE, additional members of the Sicarii fled Jerusalem and settled on the mountaintop after slaughtering the Roman garrison. According to Josephus, the Sicarii were an extremist Jewish splinter group antagonistic to a larger grouping of Jews referred to as the Zealots, who carried the main burden of the rebellion. Josephus said that the Sicarii raided nearby Jewish villages including Ein Gedi, where they massacred 700 women and children. In 73 CE, the Roman governor of Iudaea, Lucius Flavius Silva, headed the Roman legion X Fretensis and laid siege to Masada.

Another source gives the year of the siege of Masada as 73 or 74 CE. The Roman legion surrounded Masada, built a circumvallation wall and then a siege ramp against the western face of the plateau.

According to Dan Gill, geological investigations in the early 1990s confirmed earlier observations that the 114 m (375 ft) high assault ramp consisted mostly of a natural spur of bedrock. The ramp was complete in the spring of 73, after probably two to three months of siege, allowing the Romans to finally breach the wall of the fortress with a battering ram on April 16. The Romans employed the X Legion and a number of auxiliary units and Jewish prisoners of war, totaling some 15,000 (of whom an estimated 8,000 to 9,000 were fighting men), in crushing Jewish resistance at Masada.

A giant siege tower with a battering ram was constructed and moved laboriously up the completed ramp. According to Josephus, when Roman troops entered the fortress, they discovered that its defendants had set all the buildings but the food storerooms ablaze and committed mass suicide or killed each other, 960 men, women, and children in total.

Josephus wrote of two stirring speeches that the Sicari leader had made to convince his men to kill themselves. Only two women and five children were found alive. Josephus presumably based his narration upon the field commentaries of the Roman commanders that were accessible to him. Significant discrepancies exist between archaeological findings and Josephus' writings.

Josephus mentions only one of the two palaces that have been excavated, refers only to one fire, while many buildings show fire damage, and claims that 960 people were killed, while the remains of only 28 bodies at the very most have been found. Some of the other details that Josephus gives, were correct - for instance, he describes the baths that were built there, the fact that the floors in some of the buildings'were paved with stones of several colours', and that many pits were cut into the living rock to serve as cisterns.

Josephus must be referring to the sort of mosaics that Yadin found still partially intact on some of the floors. Masada was last occupied during the Byzantine period, when a small church was established at the site. The church was part of a monastic settlement identified with the monastery of Marda known from hagiographical literature.

This identification is generally accepted by researchers. The Aramaic common noun marda, "fortress", corresponds in meaning to the Greek name of another desert monastery of the time, Kastellion, and is used to describe that site in the vita (biography) of St Sabbas, but it is only used as a proper name for the monastery at Masada, as can be seen from the vita of St Euthymius. , officially the State of Israel, is a country in the Middle East, on the southeastern shore of the Mediterranean Sea and the northern shore of the Red Sea.

It has land borders with Lebanon to the north, Syria to the northeast, Jordan on the east, the Palestinian territories of the West Bank and Gaza Strip to the east and west, respectively, and Egypt to the southwest. The country contains geographically diverse features within its relatively small area. Israel's economic and technological center is Tel Aviv, while its seat of government and proclaimed capital is Jerusalem, although the state's sovereignty over Jerusalem has only partial recognition. Israel has evidence of the earliest migration of hominids out of Africa.

Canaanite tribes are archaeologically attested since the Middle Bronze Age, while the Kingdoms of Israel and Judah emerged during the Iron Age. The Neo-Assyrian Empire destroyed Israel around 720 BCE.

Judah was later conquered by the Babylonian, Persian and Hellenistic empires and had existed as Jewish autonomous provinces. The successful Maccabean Revolt led to an independent Hasmonean kingdom by 110 BCE, which in 63 BCE however became a client state of the Roman Republic that subsequently installed the Herodian dynasty in 37 BCE, and in 6 CE created the Roman province of Judea. Judea lasted as a Roman province until the failed Jewish revolts resulted in widespread destruction, expulsion of Jewish population and the renaming of the region from Iudaea to Syria Palaestina. Jewish presence in the region has persisted to a certain extent over the centuries. In the 7th century the Levant was taken from the Byzantine Empire by the Arabs and remained in Muslim control until the First Crusade of 1099, followed by the Ayyubid conquest of 1187.

The Mamluk Sultanate of Egypt extended its control over the Levant in the 13th century until its defeat by the Ottoman Empire in 1517. During the 19th century, national awakening among Jews led to the establishment of the Zionist movement in the diaspora followed by waves of immigration to Ottoman and later British Palestine. In 1947, the United Nations adopted a Partition Plan for Palestine recommending the creation of independent Arab and Jewish states and an internationalized Jerusalem. The plan was accepted by the Jewish Agency, and rejected by Arab leaders. The following year, the Jewish Agency declared the independence of the State of Israel, and the subsequent 1948 Arab-Israeli War saw Israel's establishment over most of the former Mandate territory, while the West Bank and Gaza were held by neighboring Arab states.

Israel has since fought several wars with Arab countries, and it has since 1967 occupied territories including the West Bank, Golan Heights and the Gaza Strip (still considered occupied after 2005 disengagement, although some legal experts dispute this claim). [41][42][43][fn 4].

It extended its laws to the Golan Heights and East Jerusalem, but not the West Bank. Israel's occupation of the Palestinian territories is the world's longest military occupation in modern times.

Efforts to resolve the Israeli-Palestinian conflict have not resulted in a final peace agreement. However, peace treaties between Israel and both Egypt and Jordan have been signed. In its Basic Laws, Israel defines itself as a Jewish and democratic state. Israel is a representative democracy. With a parliamentary system, proportional representation and universal suffrage. The prime minister is head of government and the Knesset is the legislature. Israel is a developed country and an OECD member, with the 32nd-largest economy in the world by nominal gross domestic product as of 2017. The country benefits from a highly skilled workforce and is among the most educated countries in the world with one of the highest percentages of its citizens holding a tertiary education degree. Israel has the highest standard of living in the Middle East, and has one of the highest life expectancies in the world.

Getting your order to you, quickly and securely is a top priority and is taken seriously here. Great care is taken in packaging and mailing every item securely and quickly.

What is a certificate of authenticity and what guarantees do you give that the item is authentic? You will be very happy with what you get with the COA; a professional presentation of the coin, with all of the relevant information and a picture of the coin you saw in the listing.