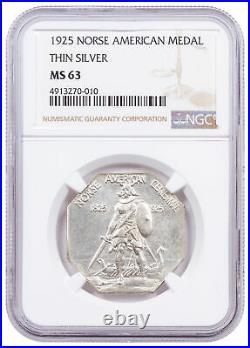 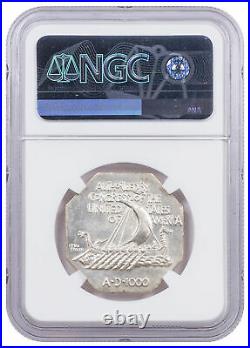 1925 United States Norse American Medal Thin Silver Medal NGC MS63 SKU62842. Mint issued a series of commemorative medals in 1925 to celebrate the 100th Anniversary of the arrival of fifty-two Norwegian immigrants to the United States in 1825 aboard the Restauration. The medals are octagonal in shape, featuring the artistry of sculptor James Earle Fraser, designer of the 1913 Buffalo Nickel. The medals were minted in gold and bronze, with two silver types identified as thick and thin. This 1925 Norse American Medal was struck from 0.3588 Troy oz. The 30 mm diameter thin style medal is a product of the Philadelphia Mint. Final mintage is reported to be only 6,000 pieces. Obverse: A Norwegian Viking chieftain is depicted on the obverse standing on the shore with a longship in the background. The chief is armed with a shield, sword and svard (dagger), and dressed in traditional Viking warrior styled armor. Inscribed "NORSE AMERICAN CENTENNIAL, " with the anniversary dates "1825" and 1925. Reverse: The reverse features a Viking longship with a dragon head prow at full sail upon a stylized sea. Inscribed "AUTHORIZED BY CONGRESS OF THE UNITED STATES OF AMERICA" above, with A.

1000 below, citing the date of Viking explorer Leif Erikson's arrival to North America. The design credit of "OPUS FRASER" appears behind the vessel, which is Latin for Fraser's work. This United States 1925 Norse American Thin Silver Medal was submitted to the Numismatic Guaranty Corporation (NGC) for review and judged to be in beautiful Mint State 63 condition. The medal features a strong strike and an impressive amount of original Mint luster, with outstanding eye appeal. The medal is presented in a sonically sealed NGC protective holder with a certification label.

We take all of our photos in house and due to reflections on the mirrored or proof surfaces of a coin there may appear to be'black' when there is not. If a coin has a color on it at all it will be described as'colorized' in the description or title.

Due to the large inventory we sell, we use stock photos. Serial numbers will vary from the image shown unless specifically stated in the product listing that the item pictured is the item you will receive. INTERNATIONAL ORDERS POLICY: We are accepting international orders from select countries.

These charges are the customer's responsibility. However, we cannot guarantee this due to the volume of orders we process each day.

Beyond the 30-day return period, Company is under no obligation to accept return of any product, but may in its discretion do so pursuant to this policy, for up to one year from the invoice date. ModernCoinMart (MCM) was launched in 2004 and quickly set the standards for online sales of bullion, US coins and world coins. Join over 100,000 loyal customers and feel confident purchasing from a company that's spent a decade building a solid and stellar reputation trusted and recognized around the world. That's the MCM way. 2018 China Macau Show Panda 2 oz Silver Proof Medal NGC PF69 UC FR SKU56217.

The item "1925 United States Norse American Medal Thin Silver Medal NGC MS63" is in sale since Monday, December 28, 2020. This item is in the category "Coins & Paper Money\Exonumia\Medals". The seller is "mcm" and is located in Sarasota, Florida.