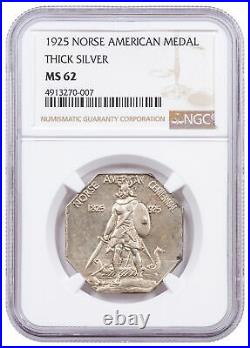 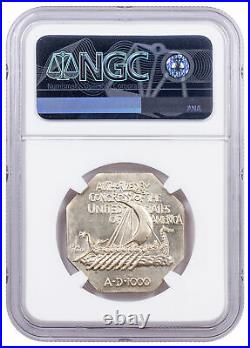 1925 United States Norse American Medal Thick Silver NGC MS62 SKU62940. Norse Americans and those with an interest in the history of American immigration are sure to love this Norse American Medal. The thick silver medal was one of four issued, all with the same designs, that marked the centennial anniversary of the Restauration's journey from Stavanger, Norway to New York. This medal was one of four issued to mark the 100th anniversary of the Restauration's voyage.

Numismatic Guaranty Corporation (NGC) graded this medal Mint State 62. Stunning Viking Warrior Design by James Earle Fraser. Obverse: On the obverse, a Viking warrior stands with his shield in one hand and his sword in the other. The image was the work of James Earle Fraser. The anniversary dates, "1825" and "1925, " flank the warrior, and "NORSE AMERICAN CENTENNIAL" is inscribed along the rim at the top.

Inscriptions on this face read, "AUTHORIZED BY CONGRESS OF THE UNITED STATES OF AMERICA, " and AD 1000. The date references Viking exploration of North America around that date. This medal received a Mint State 62 grade from the experts at Numismatic Guaranty Corporation (NGC). Add this 1925 United States Thick Silver Norse American Medal to your collection today. Specifications for this 1925 United States Norse American Medal Thick Silver NGC MS62 SKU62940. We cannot make any price adjustments after the sale is complete. Product Photo Policy: MCM attempts to display product images shown on the site as accurately as possible. We take all of our photos in house and due to reflections on the mirrored or proof surfaces of a coin there may appear to be'black' when there is not. If a coin has a color on it at all it will be described as'colorized' in the description or title.