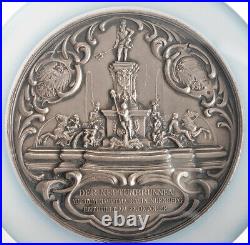 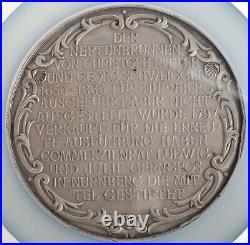 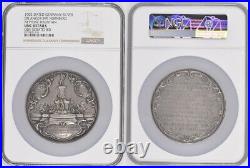 Large Silver "Neptune Fountain" Medal. Medallist: Lauer Mint Year: 1902 Mint Place: Nuremberg Reference: Erlanger 499. Certified and graded by NGC as UNC Details: Obverse scratched! - A few edge-hits are evident at 9 o'clock too! The unveiling of the Neptune Fountain at the main market in the City center of Nurnberg during 1902. 990 Diameter: 75mm Weight: 153gm. Obverse: Neptune with his trident and surrounding figures, arms of Nurnberg at either side within baroque frame. The Neptuene fountain, on the main market in Nurnberg, unveiled on 22nd October, 1902.

Reverse: Inscription in 13 lines within baroque frame. FÜR DIE ERNEU-TE AUSFÜHRUNG HABEN COMMERZIENRAT LUDWIG UN JULIE GERNGROS IN NÜRNBERG DIE MIT-TEL GESTIFTET. The funds for the newly produced fountain were donated by the commercial council Ludwig & Julie Gerngross. Nuremberg is the second-largest city of the German state of Bavaria after its capital Munich, and its 518,370 (2019) inhabitants make it the 14th-largest city in Germany.

On the Pegnitz River (from its confluence with the Rednitz in Fürth onwards: Regnitz, a tributary of the River Main) and the RhineMainDanube Canal, it lies in the Bavarian administrative region of Middle Franconia, and is the largest city and the unofficial capital of Franconia. Nuremberg forms a continuous conurbation with the neighbouring cities of Fürth, Erlangen and Schwabach with a total population of 800,376 (2019), while the larger Nuremberg Metropolitan Region has approximately 3.6 million inhabitants. The city lies about 170 kilometres (110 mi) north of Munich.