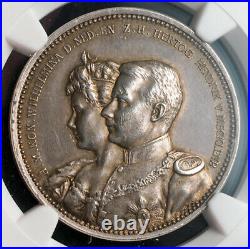 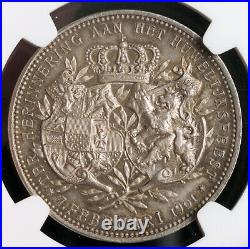 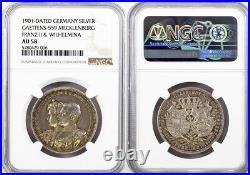 Certified and graded by NGC as AU-58! Marriage of Duke Henry of Mecklenburg-Schwerin to Queen Wilhelmina of the Netherlands on 7th February 1901. Diameter: 32mm Material: Silver Weight: 18gm.

She succeeded Wilhelmina as queen on the 4th of September 1948 at the latter's abdication. Heinrich, however, also produced at least one illegitimate child: Pim Lier. Born in 1918, Lier rose to prominence in post-war Dutch politics as chairman of the right-wing extremist Centre Party.

The birth of a son out of wedlock was likely to be only symptomatic for the duke's increasingly strained relationship with his wife. This became all the more clear at the time of the opening ceremony of the Amsterdam Summer Olympics in 1928. Even though Heinrich was not only to attend, but even to preside over the festivities, Wilhelmina did not even bother to show up, stating that her personal religious conviction that this type of event should not take place on a Sunday kept her from doing so. He was the 279th Grand Cross of the Order of the Tower and Sword in Portugal and the 1,157th Knight of the Order of the Golden Fleece in Spain in 1924. He died, at the age of 58, on 3 July 1934 in The Hague, Netherlands.

NGC AU-58" is in sale since Sunday, August 8, 2021. This item is in the category "Coins & Paper Money\Coins\ World\Europe\Germany\German States (up to 1871)". The seller is "coinworldtv" and is located in Wien.