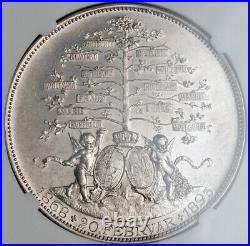 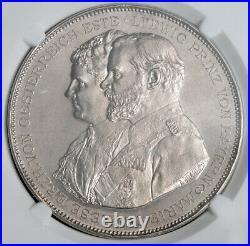 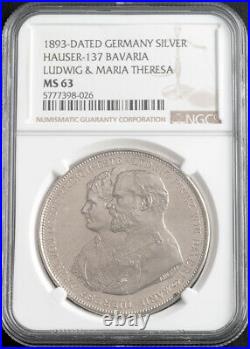 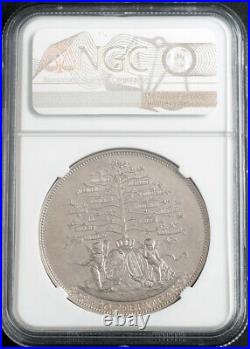 Certified and graded by PCGS as MS-63 PL no other coin of this type was ever graded proof-like by PCGS! Struck at the weight of a 2 thaler coin!

Ludwig was born in Munich, the eldest son of Prince Luitpold of Bavaria and of his wife, Archduchess Augusta of Austria (daughter of Grand Duke Leopold II of Tuscany). Hailing from Florence, Augusta always spoke in Italian to her four children. Ludwig was named for his grandfather, King Ludwig I of Bavaria. Ludwig spent his first years living in the Electoral rooms of the Munich Residenz and in the Wittelsbacher Palace.

When he was ten years old, the family moved to the Leuchtenberg Palace. In 1861 at the age of sixteen, Ludwig began his military career when his uncle, King Maximilian II of Bavaria, gave him a commission as a lieutenant in the 6th JÃÂ¤gerbattalion.

A year later he entered the Ludwig Maximilians University of Munich where he studied law and economics. When he was eighteen, he automatically became a member of the Senate of the Bavarian Legislature as a prince of the royal house. In 1866, Bavaria was allied with the Austrian Empire in the Austro-Prussian War.

Ludwig held the rank of Oberleutnant; he was wounded at the Battle of Helmstedt, taking a bullet in his thigh. He received the Knight's Cross 1st Class of the Bavarian Military Merit Order.

On December 12, 1912, Ludwig's father Luitpold died. Luitpold had been an active participant in the deposing of his nephew, King Ludwig II of Bavaria, and had also acted as Prince Regent for his other nephew, King Otto. King Otto had been judged to be mentally incapable of ruling.

Ludwig immediately succeeded his father as Prince Regent. Almost immediately there were certain elements in the press and other groups in society which called for Ludwig to be installed as King of Bavaria instead of Prince Regent. The Bavarian Legislature was not, however, currently in session, and did not meet until September 29, 1913. On November 4, 1913, the Legislature amended the constitution of Bavaria to include a clause specifying that if a regency for reasons of incapacity had lasted for ten years with no expectation that the king would ever be able to reign, the regent could proclaim the end of the regency and the demise of the crown, with such action to be ratified by the Legislature. The amendment received broad party support in the Lower Chamber where it was carried by a vote of 122 in favour, and 27 against.

In the Senate there were only six votes against the amendment. The next day, November 5, 1913, Ludwig announced to the Legislature the end of the regency and deposed his cousin King Otto. The Legislature recognised Ludwig as King Ludwig III of Bavaria. Ludwig's short reign was conservative and influenced by the Catholic encyclical.

Prime Minister Georg von Hertling, appointed by Luitpold in 1912, remained in office. At the outbreak of World War I in 1914 Ludwig sent an official dispatch to Berlin to express Bavaria's solidarity. Later Ludwig even claimed annexations for Bavaria (Alsace and the city of Antwerp in Belgium, to receive an access to the sea). His hidden agenda was to maintain the balance of power between Prussia and Bavaria within the German Empire after a victory. A popularly accepted account holds that within a day or two after Germany's declaration of war, Ludwig received a petition from a twenty-five year old Austrian, asking for permission to join the Bavarian Army.

The petition was promptly granted, and Adolf Hitler thereupon joined the Bavarian Army, eventually settling into the 16th Reserve Bavarian Infantry Regiment, where he served the remainder of the war. In 1917, when Germany's situation had gradually worsened due to World War I, Hertling became German Chancellor and Prime Minister of Prussia and Otto Ritter von Dandl was made. Minister of State of the Royal Household and of the Exterior.

President of the Council of Ministers. On November 11, 1917, a title equivalent to Prime Minister of Bavaria. Accused of showing blind loyalty to Prussia, Ludwig became increasingly unpopular during the war. As the war drew to a close, the German Revolution broke out in Bavaria.

On November 7, 1918, Ludwig fled from the Residenz Palace in Munich with his family. He was the first of the monarchs in the German Empire to be deposed.

On November 12, 1918, Prime Minister Dandl went to. Near Salzburg, to see the King and obtain what is known as the. In which the King released all government officials, soldiers and civil officers from their oath to him, but made no declaration of resignation. The newly-formed republican government of Kurt Eisner interpreted this as an abdication. His consort Maria Theresia died February 3, 1919 at Wildenwart Castle/Chiemgau. In February 1919, Eisner was assassinated; fearing that he might be the victim of a counter-assassination, Ludwig fled to Hungary, later moving on to Liechtenstein and Switzerland. There he remained until September 1921 when he took a trip to his castle NÃÂ¡dasdy in SÃÂ¡rvÃÂ¡r in Hungary. He died there October 18.

They were given a state funeral and were buried in the crypt of the cathedral. The item "1893, Bavaria, Ludwig III.

NGC MS63" is in sale since Saturday, November 28, 2020. This item is in the category "Coins & Paper Money\Coins\ World\Europe\Germany\German States (up to 1871)". The seller is "coinworldtv" and is located in Wien.