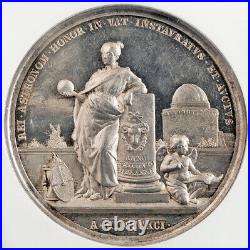 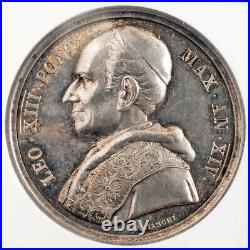 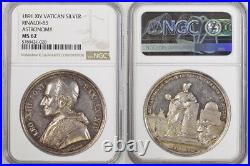 Observatory tower in background to right. Exergue: REI · ASTRONOM · HONOR · IN · VAT · INSTAVRATVS · ET · AVCTVS Exergue: A. Political events had prevented Pius IX to celebrate the jubilees of 1850 and 1875, because the Pope had to go beyond the mere granting of indulgences, relinquishing any outward manifestation, and even opening the Holy Door. Pope Leo XIII (March 2, 1810 - July 20, 1903), born Count Vincenzo Gioacchino Raffaele Luigi Pecci , was the 256th Pope of the Roman Catholic Church, reigning from 1878 to 1903, succeeding Pope Pius IX. Reigning until the age of 93, he was the oldest pope, and had the third longest pontificate, behind Pius IX and John Paul II.

He is known for intellectualism, the development of social teachings with his encyclical Rerum Novarum and his attempts to define the position of the Church to modern thinking. As soon as he was elected to the papacy, Leo XIII worked to encourage understanding between the Church and the modern world. When he firmly re-asserted the scholastic doctrine that science and religion co-exist, he required the study of Thomas Aquinas and opened the Vatican Secret Archives to qualified researchers, among whom was the noted historian of the Papacy Ludwig von Pastor.

Leo XIII was the first Pope to come out strongly in favour of the French Republic, upsetting many French monarchists. In his relations with the Italian state, Leo XIII continued the Papacy's self-imposed incarceration in the Vatican stance, and continued to insist that Italian Catholics should not vote in Italian elections or hold elected office. In his first consistory in 1879 he elevated his older brother Giuseppe a cardinal. Leo XIII was the first Pope of whom a sound recording was made. The recording can be found on a compact disc of Alessandro Moreschi's singing; a recording of his performance of the Ave Maria is available on the web.

He was also the first Pope to be filmed on the motion picture camera. He was filmed by its inventor, W. Dickson, and blessed the camera afterward. Leo XIII brought normalcy back to the Church after the tumultuous years of Pius IX.

Leo's intellectual and diplomatic skills helped regain much of the prestige lost with the fall of the Papal States. He tried to reconcile the Church with the working class, particularly by dealing with the social changes that were sweeping Europe. The new economic order had resulted in the growth of an impoverished working class, with increasing anti-clerical and socialist sympathies.

Leo helped reverse this trend. In Germany led to massive reprisals against the Church. Under Leo, the anti-Catholic measures subsided.

The Centre Party in Germany was largely a Catholic creation and was a positive force for social change. It was encouraged by Leo's support for social welfare legislation and the rights of working people. Leo's forward-looking approach encouraged Catholic Action in other European countries where the social teachings of the Church were incorporated into the agenda of Catholic parties, particularly the Christian Democratic Parties, which became an acceptable alternative to socialist parties. Leo's social teachings were reiterated throughout the 20th century by his successors. While Leo was no radical in either theology or politics, his papacy did move the Church back to the mainstream of European life.

Considered a great diplomat, he managed to improve relations with Russia, Prussia, German France, England and other countries. However, in light of a hostile anti-Catholic climate in Italy, he continued the policies of Pius IX towards Italy, without major modifications.

He had to defend the freedom of the Church against Italian persecutions and attacks in the area of education, expropriation and violation of Catholic Churches, legal measures against the Church and brutal attacks, culminating in anticlerical groups attempting to throw the body of the deceased Pope Pius IX into the Tiber river on July 13, 1881. The Pope even considered moving his residence to Trieste or Salzburg, two cities in Austria, an idea which the Austrian monarch Franz Josef I gently rejected.

His favorite poets were Virgil and Dante. The item "1891, Vatican, Pope Leo XIII.

NGC MS62" is in sale since Sunday, June 20, 2021. This item is in the category "Coins & Paper Money\Coins\ World\Europe\Italy, San Marino, Vatican\Vatican".