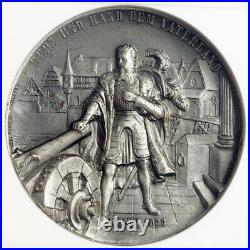 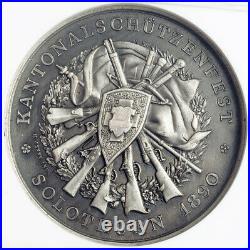 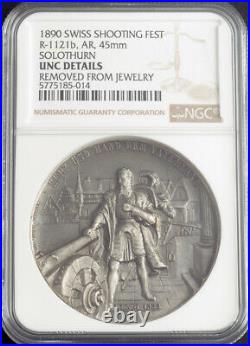 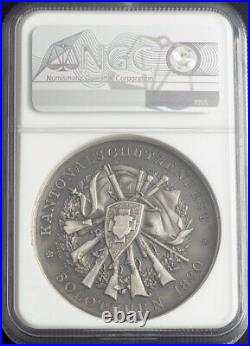 Certified and graded by NGC as UNC Details: Removed from jewelry! Diameter: 45mm Weight: 38.6gm Material: Silver. Mayor of Solothurn during 1533. , draped and mantled, standing in front of cannon, which is pointing to the City of Solothurn.

Legend: HERZ UND HAND DEM VATERLAND. Heart and hand for the Homeland. Reverse: Coat-of-arms over five rifles, bow and quiver, and flag; all over wreath. Legend: KANTONALSHÜTZENFEST / SOLOTHURN 1890 Translated. Niklaus von Wengi the Younger (around 1485 in Solothurn ; 1549 ibid) was a Solothurn politician.

Wengi became known as the hero of the Solothurn Reformation, who, as a Catholic mayor, prevented a religious war in the canton of Solothurn through courageous intervention. The Solothurn supporters of the Reformed denomination were banned from worship in the city of Solothurn in 1532 after a conflict over the election of Niklaus von Wengi as mayor broke out. This ultimately led to an uprising of the Reformed in November 1533. They holed up in the suburb of Solothurn, where they hoped for help from Bern. The Catholic people of Solothurn intended to end this uprising by force by destroying the suburb with cannon fire from the other bank of the Aare.

According to the tradition of the historian Franz Haffner After the first cannon shot, Niklaus von Wengi stood in front of the muzzle of the second cannon that was ready to fire and called for people not to shoot at fellow citizens. Dear pious burgers / if you are willing to shoot over, I want to be the first man who has to perish, look at and endure things...

After Franz Haffner :The small Solothurn general Schaw-Platz, 1666. Even if von Wengi stood up - successfully - against an armed conflict, he always represented the Catholic position and in the following negotiations, without making any concessions to the Reformed, campaigned for the restoration of the ecclesiastical unity of the canton and city of Solothurn. Alternating with his counterparts Urs Hugi and Urs Schluni, Niklaus von Wengi continued to work as mayor until his death in 1549. He lived on Hauptgasse, on the site of today's Jeger wallpaper shop. The canton of Solothurn or canton of Soleure German.

In the time of the Roman emperor Tiberius. The territory of the canton comprises land acquired by the former town, mainly in the Middle Ages.

For that reason the shape of the canton is irregular and includes two exclaves along the French border, separated from the rest of the canton by Basel-Land, which form separate districts of the canton. In 1481, the canton became a member of the military alliance of the former Swiss confederation. At the end of the Reformation, Solothurn maintained its Catholic religion.

Between 1798 and 1803 the canton was part of the Helvetic Republic. In 1803 Solothurn was one of the 19 Swiss cantons that were reconstituted by Napoleon. In 1830, the population rebelled against the aristocratic regime and the canton became definitely liberal-democratic. Even though the population was strictly Roman Catholic, Solothurn did not join the Catholic separatist movement. Similarly, the federal constitutions of 1848 and 1874 were approved. The current constitution of the canton dates from 1987. The item "1890, Swiss Cantons, Solothurn. Large Silver Shooting Thaler Medal. NGC UNC+" is in sale since Saturday, November 27, 2021.

This item is in the category "Coins & Paper Money\Coins\ World\Europe\Switzerland". The seller is "coinworldtv" and is located in Wien. This item can be shipped worldwide.