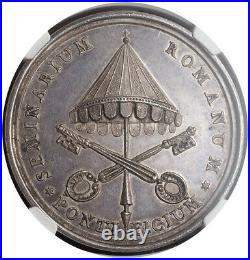 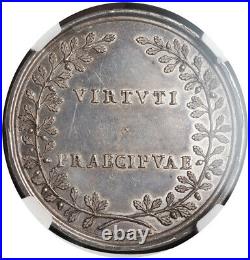 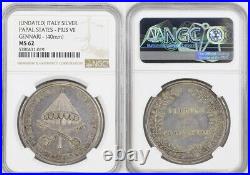 Large Silver "Sede Vacante (Feb 10 - March 31)" Medal. Mint Place: Rome Medallist: L. Certified and graded by NGC as MS-62! Denomination: Medal - Sede Vacante of 1829. The camerlengo of the last pope, who rules rome until the new pope is elected! Struck between 10th of February and 31st of March between the death of the old pope and the election of the new one. Diameter: 40mm Material: Silver Weight: 26gm. Obverse: Cross-topped pavillion behind keys in saltire.

Legend: SEMINARIUM - ROMANUM PONTI FICIUM Reverse: Latin inscription. Unto one of exceptional character. Legend: VIRTVTI PRAECIPVAE Exergue: L. Is an expression, used in the canon law of the Catholic Church, that refers to the vacancy of the episcopal see of a particular church. It is Latin for "the seat being vacant" the ablative absolute of.

"Vacant seat", or the Italian for the same term, the seat in question being the. Pietro Francesco Galleffi (Galeffi) (17701837) was an Italian Cardinal.

During the Napoleonic period, he was expelled from Rome, in 1798. He was created Cardinal in 1803. He was removed to France, in 1809. He became titular archbishop of Damasco in 1819, and was Archpriest of St.