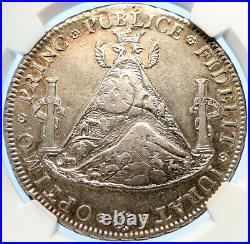 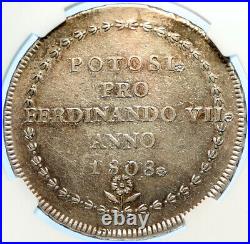 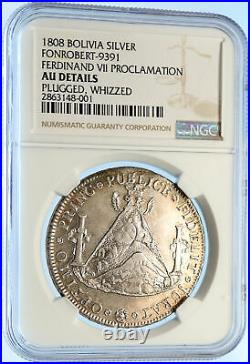 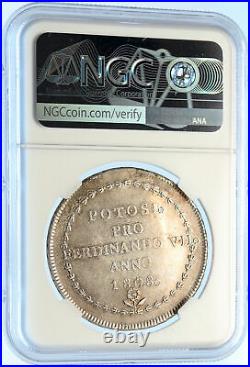 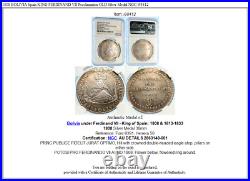 Item: i98412 Authentic Medal of. AU DETAILS 2863148-001 PRINC PUBLICE FIDELIT JURAT OPTIMO, Hill with crowned double-headed eagle atop, pillars on either side.

POTOSI PRO FERDINANDO VII ANNO 1808, Flower below, flowered ring around. Ferdinand VII (Spanish: Fernando ; 14 October 1784 - 29 September 1833) was twice King of Spain: in 1808 and again from 1813 to his death. He was known to his supporters as the Desired (el Deseado) and to his detractors as the Felon King (el Rey Felón). After being overthrown by Napoleon in 1808 he linked his monarchy to counter-revolution and reactionary policies that produced a deep rift in Spain between his forces on the right and liberals on the left.

Back in power in 1814, he reestablished the absolutist monarchy and rejected the liberal constitution of 1812. He suppressed the liberal press from 1814 to 1833 and jailed many of its editors and writers. Under his rule, Spain lost nearly all of its American possessions, and the country entered into civil war on his death. His reputation among historians is very low. He proved in many ways the basest king in Spanish history. Cowardly, selfish, grasping, suspicious, and vengeful, [he] seemed almost incapable of any perception of the commonwealth. He thought only in terms of his power and security and was unmoved by the enormous sacrifices of Spanish people to retain their independence and preserve his throne. Bolivia, officially the Plurinational State of Bolivia (Spanish: Estado Plurinacional de Bolivia), is a landlocked country located in western-central South America. The capital is Sucre while the seat of government is located in La Paz. The largest city and principal economic and financial center is Santa Cruz de la Sierra, located on the Llanos Orientales (tropical lowlands) a mostly flat region in the east of Bolivia.

It is constitutionally a unitary state, divided into nine departments. Its geography varies from the peaks of the Andes in the West, to the Eastern Lowlands, situated within the Amazon Basin.

It is bordered to the north and east by Brazil, to the southeast by Paraguay, to the south by Argentina, to the southwest by Chile, and to the northwest by Peru. One-third of the country is within the Andean mountain range. With 1,098,581 km. (424,164 sq mi) of area, Bolivia is the 5th largest country in South America and the 27th largest in the world.

The country's population, estimated at 11 million, is multiethnic, including Amerindians, Mestizos, Europeans, Asians and Africans. The racial and social segregation that arose from Spanish colonialism has continued to the modern era. Spanish is the official and predominant language, although 36 indigenous languages also have official status, of which the most commonly spoken are Guarani, Aymara and Quechua languages. Before Spanish colonization, the Andean region of Bolivia was part of the Inca Empire, while the northern and eastern lowlands were inhabited by independent tribes. Spanish conquistadors arriving from Cuzco and Asunción took control of the region in the 16th century.

During the Spanish colonial period Bolivia was administered by the Royal Audiencia of Charcas. Spain built its empire in great part upon the silver that was extracted from Bolivia's mines. After the first call for independence in 1809, 16 years of war followed before the establishment of the Republic, named for Simón Bolívar. Over the course of the 19th and early 20th century Bolivia lost control of several peripheral territories to neighboring countries including the seizure of its coastline by Chile in 1879.

Bolivia remained relatively politically stable until 1971, when Hugo Banzer led a coup d'état which replaced the socialist government of Juan José Torres with a military dictatorship headed by Banzer; Torres was murdered in Buenos Aires, Argentina by a right-wing death squad in 1976. Banzer's regime cracked down on leftist and socialist opposition and other forms of dissent, resulting in the torture and deaths of a number of Bolivian citizens. Modern Bolivia is a charter member of the UN, IMF, NAM, OAS, ACTO, Bank of the South, ALBA and USAN. For over a decade Bolivia has had one of the fastest economic growths in Latin America, however it remains one of the poorest countries in South America. It is a developing country, with a medium ranking in the Human Development Index, a poverty level of 38.6 percent, and it has one of the lowest crime rates in Latin America.

Its main economic activities include agriculture, forestry, fishing, mining, and manufacturing goods such as textiles, clothing, refined metals, and refined petroleum. Bolivia is very rich in minerals, especially tin. World-renowned expert numismatist, enthusiast, author and dealer in authentic ancient Greek, ancient Roman, ancient Byzantine, world coins & more. Ilya Zlobin is an independent individual who has a passion for coin collecting, research and understanding the importance of the historical context and significance all coins and objects represent. Send me a message about this and I can update your invoice should you want this method.

Getting your order to you, quickly and securely is a top priority and is taken seriously here. Great care is taken in packaging and mailing every item securely and quickly.

My goal is to provide superior products and quality of service. How and where do I learn more about collecting ancient coins? Visit the Guide on How to Use My Store. For on an overview about using my store, with additional information and links to all other parts of my store which may include educational information on topics you are looking for. This item is in the category "Coins & Paper Money\Exonumia\Medals".