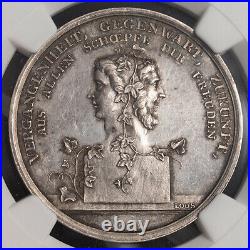 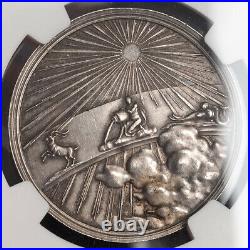 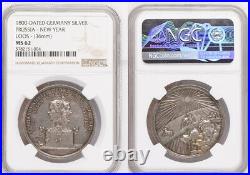 Obverse: Double-faced head of Janus (a young face for the new year and an old face for the old year) on a square base, entwined by ivy sprays. Medallist´s signature (LOOS) at 5 o'clock. Legend: VERGANGENHEIT, GEGENWART, ZUKUNFT, AUS ALLEN SCHOEPFE DIR FREUDEN.

Reverse: Zodiac band with three signs (capricorn, aquarius and fish) illuminated by a sun and appearing above clouds. In ancient Roman religion and myth, Janus /. Is the god of beginnings, gates, transitions, time, duality, doorways, passages, frames, and endings.

He is usually depicted as having two faces. It is conventionally thought that the month of January is named for Janus. , but according to ancient Roman farmers' almanacs Juno was the tutelary deity of the month. Janus presided over the beginning and ending of conflict, and hence war and peace.

The gates of a building in Rome named after him (not a temple, as it is often called, but an open enclosure with gates at each end) were opened in time of war, and closed to mark the arrival of peace. Janus had no flamen or specialised priest.

Assigned to him, but the King of the Sacred Rites. Himself carried out his ceremonies. Janus had a ubiquitous presence in religious ceremonies throughout the year.

As such, Janus was ritually invoked at the beginning of each ceremony, regardless of the main deity honored on any particular occasion. The ancient Greeks had no equivalent to Janus, whom the Romans claimed as distinctively their own. Scarce Silver New Year's & Janus Head Medal by Loos. NGC MS-62" is in sale since Friday, September 17, 2021.

This item is in the category "Coins & Paper Money\Coins\ World\Europe\Germany\German States (up to 1871)". The seller is "coinworldtv" and is located in Wien.