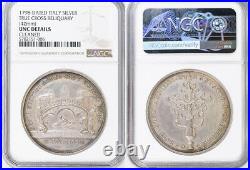 Silver "Miracle of the True Cross at the Bridge of Saint Lorenzo" Medal. Certified and graded by NGC as UNC Details: Cleaned!

Miracle of the True Cross at the Bridge of Saint Lorenzo during 1500. Weight: 24.67gm Diameter: 42mm Material: Silver. Obverse: The Bridge of Saint Lorenzo with a procession banner and 14 people. Praying people and buildings at sides in fore and background. Below we see Andrea Vendramin, the Gran Guardiano ("Grand Guardian") of the Scuola Grande di San Giovanni Evangelista who is reaching for the true cross, which tops the reliquary and is appearing miraculously above the water in front of him.

Legend: OBVIA CUSTODI MERSO CRUX EMINET UNDIS Exergue: AN : IIII. Reverse: The Reliquary of the the "True Cross" surrounded by latin inscription with date as a roman numeral (MDCCXCV ="1795"). In 1366 the Patriarch of Constantinople gave a fragment of the True Cross to Philippe de Mézières of Cyprus, who in turn donated it in 1369 to the Scuola Grande di San Giovanni Evangelista, a charitable confraternity founded in Venice in 1261. This soon became the most celebrated Cross relic in Venice.

The holy relic was held in a small crystal caplet supported by angels that surmount a rock crystal and gilded silver cross decorated in turn with Christ on the Cross, the Virgin Mary, Saint John the Evangelist, and angels. The relic would then be carried through the city in processions in this reliquary and has been praised for the miracles it has wrought. During one of the yearly processions of the True Cross of the Scuola fell in the water below the Bridge of Saint Lorenzo.

It subsequently escaped all the attempts of people to find it, aside from that of Andrea Vendramin, the Gran Guardiano ("Grand Guardian") of the school. This event, beneath the healing of a mad man in it´s presence was considered one of eight miracles, which were depicted on paintings commissioned by the Scuola from 1494 to 1501. Later, from 1795 to 1798 there were apparently also a few medals struck.

This is one of those medals, struck in Venice during around 1798. Upon closer inspection we can see that this is a mule, with the obverse of the 1798 medal (dated year 4 = 1798) and reverse of 1798 (dated MDCCXCV = 1795) in reverse. A very rare medal, especially as a mule variation! The Scuola Grande di San Giovanni Evangelista is a confraternity building located in the San Polo sestiere of the Italian city of Venice. Founded in the 13th century by a group of flagellants it was later to become one of the five Scuole Grandi of Venice.

These organisations provided a variety of charitable functions in the city as well as becoming patrons of the arts. The Scuola Grande di San Giovanni Evangelista is notable for housing a relic of the true cross and for the series of paintings it commissioned from a number of famous Venetian artists depicting Miracles of the Holy Cross.

Manin was born on May 14, 1725, the eldest of five sons of Lodovico Alvise and Maria Basadonna, the great-granddaughter of a cardinal. He attended the University of Bologna.

He was elected Doge of Venice on March 9, 1789, approximately one month before the start of the French Revolution, on the first ballot (the electoral assembly was composed of 41 members). His traditional coronation ceremony required him to throw coins to the Venetians, which cost more than 458,197 Lira, less than a quarter of which was paid from the funds of the Republic of Venice, the rest coming out of his own pocket. By the year 1792, he had allowed the once great Venetian merchant fleet to decline to a mere 309 merchantmen. When Napoleon invaded Italy, Venice, along with Genoa, did not initially join the coalition of Italian states formed in 1795, instead maintaining neutrality.

On April 15, 1797, Jean-Andoche Junot gave the Doge an ultimatum which was not accepted. A secret addition to the Treaty of Leoben, signed on April 17, 1797, gave Venice-as well as Istria and Dalmatia- to Austria. On April 25, 1797, the French fleet arrived at the Lido. The Doge surrendered on May 12, 1797 and left the Doge's Palace two days later. On May 16, French troops entered Piazza San Marco and the surrender contract was officially signed, submitting Venice to French rule, and incorporating it into the Kingdom of Italy.

This item is in the category "Coins & Paper Money\Coins: World\Europe\Italy, San Marino, Vatican\Italian States (up to 1861)". The seller is "coinworldtv" and is located in this country: AT. This item can be shipped worldwide.