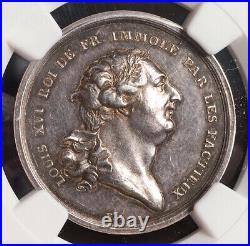 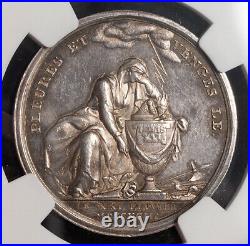 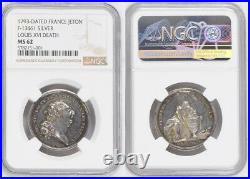 Certified and graded by NGC as MS-62! Louis XVI, Mourning and Vengeance! Diameter: 30mm Material: Silver Weight: 9.3gm. Obverse: Bare head of Louis XV right. Legend: LOUIS XVI ROI DE FR. Reverse: Veiled personification of France, seated leaning over urn with inscription (LOVIS XVI) pointing with right hand to fallen crown on ground, which lays beneath pikes and halberds. Cloud above from which a thunderbolt is striking a burning heart, which is placed on the urn. Legend: PLEURÉS ET VENGÉS - LE! Louis was officially arrested on 13 August 1792, and sent to the Temple, an ancient fortress in Paris that was used as a prison. On 21 September, the National Assembly declared France to be a Republic and abolished the Monarchy.

Louis was stripped of all of his titles and honours, and from this date was known as simply Citoyen Louis Capet. The Girondins were partial to keeping the deposed king under arrest, both as a hostage and a guarantee for the future. The more radical members mainly the Commune and the Parisian deputies who would soon be known as the Mountain argued for Louis's immediate execution. The legal background of many of the deputies made it difficult for a great number of them to accept an execution without the due process of law of some sort, and it was voted that the deposed monarch be tried before the National Convention, the organ that housed the representatives of the sovereign people. In many ways the former king's trial represented the trial of the revolution.

In November 1792, the Armoire de fer (French:'iron chest') incident took place at the Tuileries Palace. This was believed to have been a hiding place at the Royal apartments, where some secret documents were kept. The existence of this iron cabinet was publicly revealed to Jean-Marie Roland, Girondinist Minister of the Interior. The resulting scandal served to discredit the King. On 11 December, among crowded and silent streets, the deposed King was brought from the Temple to stand before the Convention and hear his indictment, an accusation of high treason and crimes against the State.

On 26 December, his counsel, Raymond de Sèze, delivered Louis' response to the charges, with the assistance of François Tronchet and Malesherbes. On 15 January 1793, the Convention, composed of 721 deputies, voted on the verdict. Given overwhelming evidence of Louis's collusion with the invaders, the verdict was a foregone conclusion with 693 deputies voting guilty, none for acquittal, with 23 abstaining.

The next day, a roll-call vote was carried out to decide upon the fate of the former King, and the result was uncomfortably close for such a dramatic decision. 288 of the Deputies voted against death and for some other alternative, mainly some means of imprisonment or exile.

This decision would be final. On Monday, 21 January 1793, Louis was beheaded by guillotine on the Place de la Révolution. The executioner, Charles Henri Sanson, testified that the former King had bravely met his fate. As Louis mounted the scaffold he appeared dignified and resigned.

He delivered a short speech in which he reasserted his innocence I pardon those who are the cause of my misfortunes.... He declared himself willing to die and prayed that the people of France would be spared a similar fate. Many accounts suggest Louis XVI's desire to say more, but Antoine-Joseph Santerre, a general in the National Guard, halted the speech by ordering a drum roll. The former King was then quickly beheaded.

Some accounts of Louis's beheading indicate that the blade did not sever his neck entirely the first time. There are also accounts of a blood-curdling scream issuing from Louis after the blade fell but this is unlikely, since the blade severed Louis's spine. It is agreed that while Louis's blood dripped to the ground many members of the crowd ran forward to dip their handkerchiefs in it.

This account was proven true in 2012 after a DNA comparison linked blood thought to be from Louis XVI's beheading to DNA taken from tissue samples originating from what was long thought to be the mummified head of Henry IV of France. The blood sample was taken from a gourd carved to commemorate the heroes of the French Revolution that had, according to legend, been used to house Louis's blood. Louis XVI or Louis-Auguste de France (Versailles, 23 August 1754 Paris, 21 January 1793) ruled as King of France and of Navarre from 1774 until 1791, and then as King of the French from 1791 to 1793. Suspended and arrested during the Insurrection of 10 August, he was tried by the National Convention, found guilty of treason, and executed by guillotine on 21 January 1793.

He was the only king of France to be executed. Although Louis was beloved at first, his indecisiveness and conservatism led some elements of the people of France to eventually view him as a symbol of the perceived tyranny of the Ancien Régime. After the abolition of the monarchy in 1793, the new republican government gave him the surname Capet, a reference to the nickname of Hugh Capet, founder of the Capetian dynasty, which the revolutionaries wrongly interpreted as a family name. He was also informally nicknamed. (Louis the Last), a derisive use of the traditional nicknaming of French kings. Today, historians and French people in general have a more nuanced view of Louis XVI, who is seen as an honest man with good intentions, but who was probably unfit for the herculean task of reforming the monarchy, and who was used as a scapegoat by the revolutionaries. Silver Louis XVI, Mourning & Vengeance Medal. NGC MS-62" is in sale since Thursday, September 16, 2021. This item is in the category "Coins & Paper Money\Coins\ World\Europe\Germany\German States (up to 1871)". The seller is "coinworldtv" and is located in Wien. This item can be shipped worldwide.