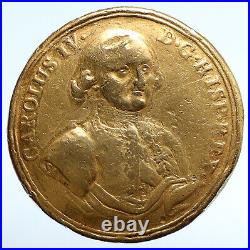 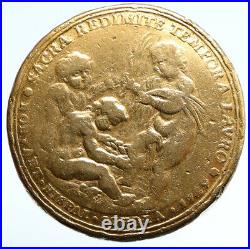 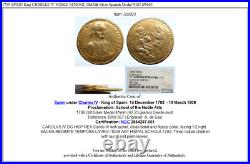 2864287-001 CAROLVS IV DG HISP REX. Carlos IV with jacket, cloak band and fleece collar, facing 1/2 right. SACRA REDIMITE TEMPORA LAVRO / NOB ART HISPAL SCHOLA 1789., Three naked children with laurel and palm leaves. Charles IV (Carlos Antonio Pascual Francisco Javier Juan Nepomuceno José Januario Serafín Diego; 11 November 1748 - 20 January 1819) was King of Spain from 14 December 1788, until his abdication on 19 March 1808. Charles was the second son of Charles III and his wife, Maria Amalia of Saxony. He was born in Naples (11 November 1748), while his father was King of Naples and Sicily. His elder brother, Don Felipe, was passed over for both thrones, due to his learning disabilities and epilepsy. In Naples and Sicily, Charles was referred to as the Prince of Taranto. He was called El Cazador (meaning "the Hunter"), due to his preference for sport and hunting, rather than dealing with affairs of the state. Charles was considered by many to have been amiable, but simple-minded. In 1788, Charles III died and Charles IV succeeded to the throne. He intended to maintain the policies of his father, and retained his prime minister, the Count of Floridablanca, in office. Even though he had a profound belief in the sanctity of his office, and kept up the appearance of an absolute, powerful monarch, Charles never took more than a passive part in his own government. The affairs of government were left to his wife, Maria Luisa, and his prime minister, while he occupied himself with hunting. In 1792, political and personal enemies ousted Floridablanca from office, replacing him with Pedro Pablo Abarca de Bolea, Count of Aranda. However, in the wake of the war against Republican France, the liberal-leaning Count of Aranda was himself replaced by Manuel de Godoy, a favourite of the Queen and widely believed to be her lover, who enjoyed the lasting favor of the King. In 1799, he authorized Prussian aristocrat and scientist Alexander von Humboldt to travel freely in Spanish America, with royal officials encouraged to aid him in his investigation of key areas of Spain's empire.

After the declaration, Portugal and Spain signed a treaty of mutual protection against France. In 1796 France forced Godoy to enter into an alliance, and declare war on the Kingdom of Great Britain. As a consequence, Spain became one of the maritime empires to have been allied with Republican France in the French Revolutionary War, and for a considerable duration. Spain remained an ally of France and supported the Continental Blockade until the British naval victory at Trafalgar, when Spain became allied with Britain. However, after Napoleon's victory over Prussia in 1807, Godoy again steered Spain back onto the French side.

This switching of alliances devalued Charles' position as a trustworthy ally, increasing Godoy's unpopularity, and strengthening the fernandistas (supporters of Crown Prince Ferdinand), who favoured an alliance with the United Kingdom. Economic troubles, rumours about a sexual relationship between the Queen and Godoy, and the King's ineptitude, caused the monarchy to decline in prestige among the population.

Anxious to take over from his father, and jealous of the prime minister, Crown Prince Ferdinand attempted to overthrow the King in an aborted coup in 1807. Spain, officially the Kingdom of Spain (Spanish: Reino de España), is a country mostly located on the Iberian Peninsula in Europe, with there also being two large archipelagoes, the Balearic Islands in the Mediterranean Sea and the Canary Islands off the African Atlantic coast, two cities, Ceuta and Melilla, on the African mainland and several small islands in the Alboran Sea near the African coast. The country's mainland is bordered to the south and east by the Mediterranean Sea except for a small land boundary with Gibraltar; to the north and northeast by France, Andorra, and the Bay of Biscay; and to the west and northwest by Portugal and the Atlantic Ocean. It is the only European country to have a border with an African country (Morocco) and its African territory accounts for nearly 5% of its population, mostly in the Canary Islands but also in Ceuta and Melilla. Flag & Coat of Arms.

Modern humans first arrived in the Iberian Peninsula around 35,000 years ago. Iberian cultures along with ancient Phoenician, Greek and Carthaginian settlements developed on the peninsula until it came under Roman rule around 200 BCE, after which the region was named Hispania, based on the earlier Phoenician name Sp(a)n or Spania. At the end of the Western Roman Empire the Germanic tribal confederations in migration from Central Europe invaded the Iberian peninsula and established themselves in relatively independent realms in its western provinces, including the Sueves, Alans and Vandals. Eventually, the Visigoths would integrate by force all remaining independent territories in the peninsula, including Byzantine provinces into the Kingdom of Toledo that more or less unified politically, ecclesiastically and legally all the former Roman provinces or successor kingdoms of what was then known in documents as Hispania.

The Visigothic kingdom fell to the Moors except in the north where shortly after started a process known as Reconquista. Spain emerged as a unified country in the 15th century under the Catholic Monarchs, who completed the eight centuries-long Reconquista in 1492. In the early modern period, Spain became one of history's first global empires, leaving a vast cultural and linguistic legacy that includes over 500 million Hispanophones, making Spanish the world's second most spoken native language, after Mandarin Chinese. Spain is a parliamentary democracy and constitutional monarchy, with King Felipe VI as head of state. It is a major developed country with the world's fourteenth largest economy by nominal GDP and sixteenth largest by purchasing power parity. It is a member of the United Nations (UN), the European Union (EU), the Eurozone, the Council of Europe (CoE), the Organization of Ibero-American States (OEI), the Union for the Mediterranean, the North Atlantic Treaty Organization (NATO), the Organisation for Economic Co-operation and Development (OECD), OSCE, the Schengen Area, the World Trade Organization (WTO) and many other international organisations. Spain has a "permanent invitation" to the G20 summits that occur generally once a year. World-renowned expert numismatist, enthusiast, author and dealer in authentic ancient Greek, ancient Roman, ancient Byzantine, world coins & more.

My goal is to provide superior products and quality of service. How and where do I learn more about collecting ancient coins? Visit the Guide on How to Use My Store.

For on an overview about using my store, with additional information and links to all other parts of my store which may include educational information on topics you are looking for. This item is in the category "Coins & Paper Money\Exonumia\Medals". The seller is "highrating_lowprice" and is located in this country: US.