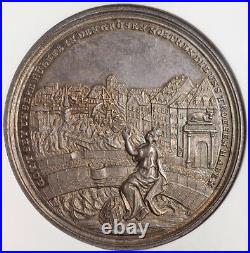 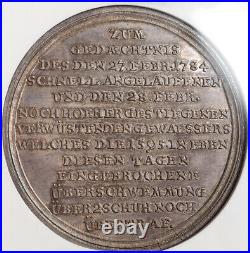 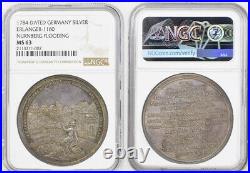 The meat bridge (Fleischbrücke) in background under which the flooded Pegnitz River with strong streams destroying a building in background. Legend: GOTT SEY UNSERE HÜLFFE IN DEN GROSEN NOETHEN DIE UNS TROFFEN HABEN Translated. May the Lord, be our helper in these great miseries which plagues us. Reverse: Inscription in 13 lines in German. Legend: ZUM GEDAECHTNIS DES DEN 27.

1784 SCHNELL ANGELAUFENEN UND DEN 28. NOCH HOEHER GESTIEGENEN VERWÜSTENDEN GEWAESSERS WELCHES DIE 1595. IN EBEN DIESEN TAGEN EINGEBROCHEN ÜBERSCHWEMMUNG ÜBER 2. In remembrance of the swiftly appeared flood during 27th February 1784, which worsened during 28th of February and with it´s destructive waters even topped the flood height of the flood of 1595 by 2 feet.

The Fleisch Bridge (German: Fleischbrücke or "Meat Bridge") or Pegnitz Bridge (Pegnitzbrücke) is a late Renaissance bridge in Nuremberg, Germany. The bridge crosses the river Pegnitz in the center of the old town, linking the districts St. Lorenz along the axis of the main market.

The single-arch bridge was built between 1596 and 1598 and replaced an earlier mixed construction of stone and wood which had been repeatedly destroyed by flood. The Fleisch Bridge is notable for several technical features that were advanced for its time.

These include an unusual large width of 15.3 m, and a clear span of 27 m which made it the largest masonry bridge arch in Germany at the time of its construction. With a rise of only 4.2 m, the arch features a span-to-rise ratio of 6.4 to 1, giving the bridge an almost unprecedented flat profile. This, however, came at the cost of high lateral thrusts even for a segmental arch bridge.

This problem was solved by a particularly innovative construction of the abutments which were built onto 2000 wooden piles, 400 of which were rammed obliquely into the grounds. A very similar arrangement of the abutments had also been implemented slightly earlier at the Rialto bridge, leading to speculations about a technology transfer from Venice, with which Nuremberg shared close trade links. A recent in-depth research, however, stresses the originality of the Fleisch Bridge on grounds of technical differences between the two bridges. The Fleisch Bridge has practically remained unchanged since the addition of a portal in 1599 and survived World War II almost unscathed.

A Latin inscription at the portal reads: Omnia habent ortus suaque in crementa sed ecce quem cernis nunquam bos fuit hic Vitulus. All things have a beginning and grow, but the ox upon whom you now look was never a calf. Is the second-largest city of the German federal state of Bavaria after its capital Munich, and its 511,628 (2016) inhabitants make it the 14th largest city in Germany. On the Pegnitz River (from its confluence with the Rednitz in Fürth onwards: Regnitz, a tributary of the River Main) and the RhineMainDanube Canal, it lies in the Bavarian administrative region of Middle Franconia, and is the largest city and the unofficial capital of Franconia.

Nuremberg forms a continuous conurbation with the neighbouring cities of Fürth, Erlangen and Schwabach with a total population of 787,976 (2016), while the larger Nuremberg Metropolitan Region has approximately 3.5 million inhabitants. The city lies about 170 kilometres (110 mi) north of Munich.

It is the largest city in the East Franconian dialect area colloquially: "Franconian"; German. There are many institutions of higher education in the city, including the University of Erlangen-Nuremberg. With 39,780 students in 2017, it is Bavaria's third-largest and Germany's 11th-largest university, with campuses in Erlangen and Nuremberg and a university hospital in Erlangen (Universitätsklinikum Erlangen). Technische Hochschule Nürnberg Georg Simon Ohm. Are also located within the city.

Is Bavaria's second-largest opera orchestra after the Bavarian State Opera's Bavarian State Orchestra in Munich. Nuremberg is the birthplace of Albrecht Dürer and Johann Pachelbel. The item "1784, Nuremberg (City).

Silver 2nd Great Nurnberg Flooding Medal. NGC MS-63" is in sale since Sunday, June 20, 2021. This item is in the category "Coins & Paper Money\Coins\ World\Europe\Germany\German States (up to 1871)". The seller is "coinworldtv" and is located in Wien. This item can be shipped worldwide.