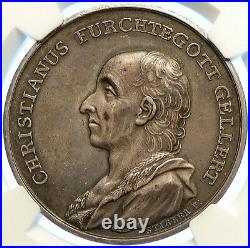 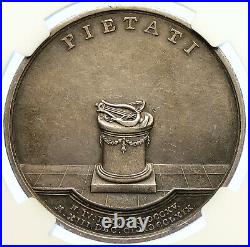 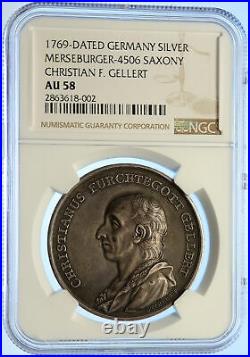 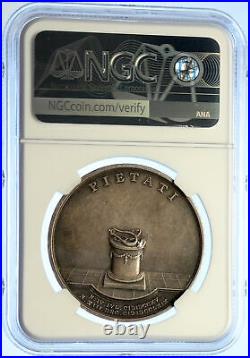 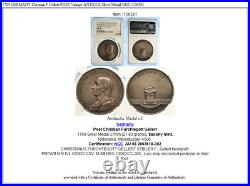 AU 58 2863618-002 CHRISTIANUS FURCHTEGOTT GELLERT STIBLER F:, Gellert facing left. PIETATI N:IV:IVL:CIOIOCCXV. Lyre atop decorated pedestal on tiled floor. Christian Fürchtegott Gellert (4 July 1715 - 13 December 1769) was a German poet, one of the forerunners of the golden age of German literature that was ushered in by Lessing.

Gellert was born at Hainichen in Saxony, at the foot of the Erzgebirge. After attending the school of St. Afra in Meissen, he entered Leipzig University in 1734 as a student of theology, but in 1738 Gellert broke off his studies as his family could no longer afford to support him and became a private tutor for a few years. Returning to Leipzig in 1741, he contributed to the.

A periodical founded by former disciples of Johann Christoph Gottsched who had revolted against the pedantry of his school. Owing to shyness and poor health, Gellert gave up the idea of entering the ministry. However, he finally completed his magister degree in 1743 and qualified as a university lecturer in 1744. In 1745 he established himself as a.

In philosophy at the university of Leipzig, lecturing on poetry, rhetoric, and moral philosophy. In 1751 he was appointed extraordinary professor of philosophy, a post he held until his death at Leipzig in 1769.

Gellert was esteemed and venerated by his students, and others who knew him, due in great part to his personal character; he was known to be unflaggingly amiable and generous, and of unaffected piety and humility. He wrote in order to raise the religious and moral character of the people, and to this end employed language which, though at times prolix, was always correct and clear.

He thus became one of the most popular German authors, and some of his poems enjoyed a celebrity out of proportion to their literary value. His immensely successful collection of fables and stories in verse. First published in 1746, with a second part appearing in 1748, established his literary reputation. A comparably popular collection of religious poems and hymns.

It contained hymns such as "Herr, stärke mich, dein Leiden zu bedenken", a Passion hymn written to the tune of "Herzliebster Jesu". Not a little of Gellert's fame is due to the time when he lived and wrote. The German literature of the period was dominated by Gottsched's school. A band of high-spirited youths, of whom Gellert was one, resolved to free themselves from what were seen as the conventional trammels of such pedants, and began a revolution which was finally consummated by Schiller and Goethe. Karl Philipp Moritz, in the context of his travels in England in 1782, remarked: Among us Germans...

I can think of no poet's name beyond Gellert's which comes readily into the minds of the common people. The fables, for which Gellert took La Fontaine as his model, are simple and didactic. His religious poems were adopted as hymns by Catholics and Protestants alike. The best known of his hymns is "Die Ehre Gottes aus der Natur" ("The Heavens are Telling").

Gellert wrote a few sentimental comedies. Das Los in der Lotterie. 1747, the last of which was much admired. Leben der schwedischen Gräfin von G. (1746), a weak imitation of Samuel Richardson's.

Is remarkable for being the first German attempt at a psychological novel. Besides lecturing to large audiences on moral matters, Gellert maintained a wide-ranging correspondence with both strangers and friends, especially with those seeking advice on moral questions. Regarded by many correspondents as a teacher also of good writing style, in 1751 he published a volume of model letters, along with an essay on letter-writing. Briefe, nebst einer praktischen Abhandlung von dem guten Geschmacke in Briefen. Germany, officially the Federal Republic of Germany is a federal parliamentary republic in western-central Europe. It includes 16 constituent states and covers an area of 357,021 square kilometres (137,847 sq mi) with a largely temperate seasonal climate. Its capital and largest city is Berlin.

With 81 million inhabitants, Germany is the most populous member state in the European Union. After the United States, it is the second most popular migration destination in the world. Various Germanic tribes have occupied northern Germany since classical antiquity.

A region named Germania was documented before 100 CE. During the Migration Period the Germanic tribes expanded southward. Beginning in the 10th century, German territories formed a central part of the Holy Roman Empire. During the 16th century, northern German regions became the centre of the Protestant Reformation.

The rise of Pan-Germanism inside the German Confederation resulted in the unification of most of the German states in 1871 into the Prussian-dominated German Empire. The establishment of the Third Reich in 1933 led to World War II and the Holocaust. After 1945, Germany split into two states, East Germany and West Germany. In 1990, the country was reunified. In the 21st century, Germany is a great power and has the world's fourth-largest economy by nominal GDP, as well as the fifth-largest by PPP. As a global leader in several industrial and technological sectors, it is both the world's third-largest exporter and importer of goods. Germany is a developed country with a very high standard of living sustained by a skilled and productive society. It upholds a social security and universal health care system, environmental protection and a tuition free university education.

Germany was a founding member of the European Union in 1993. It is part of the Schengen Area, and became a co-founder of the Eurozone in 1999.

Germany is a member of the United Nations, NATO, the G8, the G20, and the OECD. The national military expenditure is the 9th highest in the world. Known for its rich cultural history, Germany has been continuously the home of influential artists, philosophers, musicians, sportsmen, entrepreneurs, scientists and inventors. World-renowned expert numismatist, enthusiast, author and dealer in authentic ancient Greek, ancient Roman, ancient Byzantine, world coins & more.