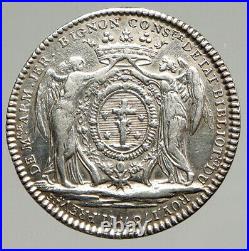 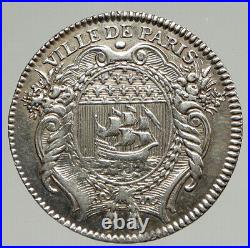 Item: i94285 Authentic Medal of. French King: 1 September 1715 - 10 May 1774 Paris 1767 Silver Jeton / Token / Medal 30mm (9.62 grams) VILLE DE PARIS, Coat-of-arms. TE, Angels on either side of decorated cross positioning crown atop. Jetons or jettons are tokens or coin-like medals produced across Europe from the 13th through the 17th centuries. They were produced as counters for use in calculation on a counting board, a lined board similar to an abacus.

Thousands of different jetons exist, mostly of religious and educational designs, as well as portraits, the last of which most resemble coinage, somewhat similar to modern, non-circulation commemorative coins. The spelling "jeton" is from the French; the English spell it "jetton". Louis XV (15 February 1710 - 10 May 1774), known as Louis the Beloved , was a monarch of the House of Bourbon who ruled as King of France from 1 September 1715 until his death in 1774. He succeeded his great-grandfather Louis XIV at the age of five. Until he reached maturity (then defined as his 13th birthday) on 15 February 1723, the kingdom was ruled by Philippe II, Duke of Orleans, as Regent of France.

Cardinal Fleury was his chief minister from 1726 until the Cardinal's death in 1743, at which time the young king took sole control of the kingdom. He ceded New France in North America to Spain and Great Britain at the conclusion of the disastrous Seven Years' War in 1763. He incorporated the territories of the Duchy of Lorraine and the Corsican Republic into the Kingdom of France.

He was succeeded in 1774 by his grandson Louis XVI, who was executed by guillotine during the French Revolution. Two of his other grandsons, Louis XVIII and Charles X, occupied the throne of France after the fall of Napoleon I. Historians generally give his reign very low marks, especially as wars drained the treasury and set the stage for the governmental collapse and French Revolution in the 1780s. France, officially the French Republic (French: République française), is a sovereign state comprising territory in western Europe and several overseas regions and territories.

During the Iron Age, what is now Metropolitan France was inhabited by the Gauls, a Celtic people. The Gauls were conquered in 51 BC by the Roman Empire, which held Gaul until 486. The Gallo-Romans faced raids and migration from the Germanic Franks, who dominated the region for hundreds of years, eventually creating the medieval Kingdom of France.

France emerged as a major European power in the Late Middle Ages, with its victory in the Hundred Years' War (1337 to 1453) strengthening French state-building and paving the way for a future centralized absolute monarchy. During the Renaissance, France experienced a vast cultural development and established the beginning of a global colonial empire. The 16th century was dominated by religious civil wars between Catholics and Protestants (Huguenots). France became Europe's dominant cultural, political, and military power under Louis XIV. French philosophers played a key role in the Age of Enlightenment during the 18th century. In 1778, France became the first and the main ally of the new United States in the American Revolutionary War. In the late 18th century, the absolute monarchy was overthrown in the French Revolution. Among its legacies was the Declaration of the Rights of Man and of the Citizen, one of the earliest documents on human rights, which expresses the nation's ideals to this day. France became one of modern history's earliest republics until Napoleon took power and launched the First French Empire in 1804. Fighting against a complex set of coalitions during the Napoleonic Wars, he dominated European affairs for over a decade and had a long-lasting impact on Western culture. Following the collapse of the Empire, France endured a tumultuous succession of governments: the monarchy was restored, it was replaced in 1830 by a constitutional monarchy, then briefly by a Second Republic, and then by a Second Empire, until a more lasting French Third Republic was established in 1870. By the 1905 law, France adopted a strict form of secularism, called laïcité, which has become an important federative principle in the modern French society. France reached its territorial height during the 19th and early 20th centuries, when it ultimately possessed the second-largest colonial empire in the world.

In World War I, France was one of the main winners as part of the Triple Entente alliance fighting against the Central Powers. France was also one of the Allied Powers in World War II, but came under occupation by the Axis Powers in 1940. Following liberation in 1944, a Fourth Republic was established and later dissolved in the course of the Algerian War. The Fifth Republic, led by Charles de Gaulle, was formed in 1958 and remains to this day. Following World War II, most of the empire became decolonized.

Throughout its long history, France has been a leading global center of culture, making significant contributions to art, science, and philosophy. It hosts Europe's third-largest number of cultural UNESCO World Heritage Sites (after Italy and Spain) and receives around 83 million foreign tourists annually, the most of any country in the world. France remains a great power with significant cultural, economic, military, and political influence. It is a developed country with the world's sixth-largest economy by nominal GDP and eight-largest by purchasing power parity. According to Credit Suisse, France is the fourth wealthiest nation in the world in terms of aggregate household wealth.

France is a founding member of the United Nations, where it serves as one of the five permanent members of the UN Security Council. It is a member of the Group of 7, North Atlantic Treaty Organization (NATO), Organisation for Economic Co-operation and Development (OECD), the World Trade Organization (WTO), and La Francophonie. France is a founding and leading member state of the European Union (EU). World-renowned expert numismatist, enthusiast, author and dealer in authentic ancient Greek, ancient Roman, ancient Byzantine, world coins & more. Ilya Zlobin is an independent individual who has a passion for coin collecting, research and understanding the importance of the historical context and significance all coins and objects represent. Send me a message about this and I can update your invoice should you want this method. Getting your order to you, quickly and securely is a top priority and is taken seriously here. Great care is taken in packaging and mailing every item securely and quickly.

How and where do I learn more about collecting ancient coins? Visit the Guide on How to Use My Store.