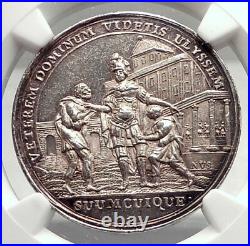 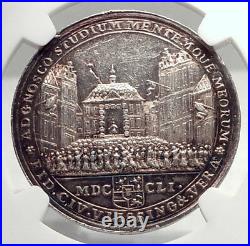 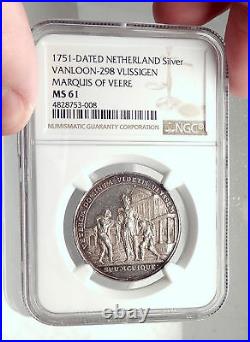 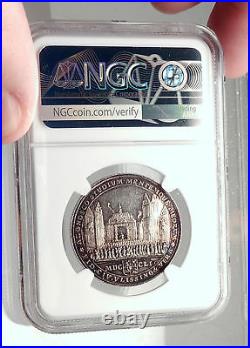 Item: i73304 Authentic Coin of. William IV (Willem IV) - Stadtholder of the United Provinces: 4 May 1747 - 22 October 1751 Prince of Orange Scatter Medal 1751 Silver Medal 32mm Reference: Van Loon 298; KPK 2949 Certification: NGC. MS 61 4828753-008 Prince as Ulysses, standing between his son Telemachus and his minion Eumenes; building with galleries in background. Town hall of the city of Veere, the Stadtholder standing on the decorated facade.

Veere (Zeelandic: Ter Veere) is a municipality with a population of 22,000 and a town with a population of 1,500 in the southwestern Netherlands, in the region of Walcheren in the province of Zeeland. The name Veere means "ferry": Wolfert Van Borssele established a ferry and ferry house there in 1281. This ferry he called the "camper-veer" or "Ferry of Campu" and it soon became known as "de Veer". In the same year 1281 Wolfert also built the castle Sandenburg on one of the dikes he had built. On 12 November 1282, Count Floris V.

Thereupon issued a charter by which Wolfert received the sovereignty to the land and castle with the ferry and ferry house. From that time on Wolfert was given the title of Lord Van der Veer.

Veere received city rights in 1355. The "Admiraliteit van Veere" (Admiralty of Veere) was set up as a result of the Ordinance on the Admiralty of 8 January 1488 in an attempt to create a central naval administration in the Burgundian Netherlands. To this was subordinated the Vice-Admiralty of Flanders in Dunkirk. In 1560 under admiral Philip de Montmorency, Count of Hoorn, this admiralty relocated near Ghent and in 1561 the Habsburg naval forces were also moved to Veere. Veere functioned as the staple port for Scotland. In Scotland it was known as Campvere. Flemish architects Antonis Keldermans and Evert Spoorwater designed the Grote Kerk, the fortifications, the Cisterne and the town hall. During this period of prosperity, the cultural centre was located at Sandenburgh castle, the residence of the noble Van Borsele and Van Bourgondië families. Court painter Jan Gossaert van Mabuse worked here. The poet Adrianus Valerius lived and worked in the city from 1591. In the 17th and 18th centuries, Veere was a prosperous trading city, with about 750 houses inside the city walls then, compared to about 300 as of 2013. At the start of the Second World War, there was a Royal Netherlands Navy seaplane base at Veere, with six Fokker C XIV-W aircraft. On 12 May 1940 the base was bombed by He 111 bombers causing some casualties. On 14 May, the seaplanes were ordered to evacuate to France and then England, eventually arriving in the Dutch East Indies where they would be destroyed in action with the Japanese in 1941 and 1942. On 17 May, German infantry of SS Regiment Deutschland of the 2nd SS Panzer Division crossed onto Walcheren via the Sloedam and by 18:00 that evening, the Dutch forces on the island, including the garrison at Veere, were ordered to surrender. Veere was finally liberated on 7 November 1944 by Scottish troops of the British 52nd (Lowland) Infantry Division during Operation Infatuate, the Allied assault on Walcheren. As part of the preparations for the operation, the island's sea dykes were bombed resulting in the inundation of much of the area.

Unlike many other towns on the island, Veere was virtually undamaged in the fighting. As a result of the damming of the Veerse Gat inlet in 1961, the fishing fleet of Veere moved to a new home port at Colijnsplaat on Noord-Beveland.

As of 2013 the main business of the town is tourism. Veere municipality reached its current expanded shape in 1997, after the addition of several neighboring towns. During the course of nearly two centuries seventeen historical municipalities have merged to become present-day Veere. Its original full name was'Veere-de-Stad en Zanddijk-Binnen'. William IV, Prince of Orange-Nassau (Willem Karel Hendrik Friso; 1 September 1711 - 22 October 1751) was the first hereditary Stadtholder of all the United Provinces.

William was born in Leeuwarden, Netherlands, the son of John William Friso, Prince of Orange, head of the Frisian branch of the House of Orange-Nassau, and of his wife Landgravine Marie Louise of Hesse-Kassel (or Hesse-Cassel). He was born six weeks after the death of his father.

William succeeded his father as Stadtholder of Friesland and also, under the regency of his mother until 1731, as Stadtholder of Groningen. In 1722 he was elected Stadtholder of Guelders. The four other provinces of the Dutch Republic:, Holland, Zeeland, Utrecht and Overijssel had in 1702 decided not to appoint a stadtholder after the death of stadtholder William III, issuing the history of the Republic into a period that is known as the Second Stadtholderless Period. In 1747 those four provinces also accepted William as their stadtholder. In 1720 William was named the 549th Knight of the Order of the Garter.

On 25 March 1734 he married at St James's Palace Anne, Princess Royal, eldest daughter of King George II of Great Britain and Caroline of Ansbach. William and Anne had five children. A stillborn daughter (born 19 December 1736). A stillborn daughter (born 22 December 1739). Princess Carolina of Orange-Nassau (28 February 1743 - 6 May 1787), married Karl Christian of Nassau-Weilburg. Princess Anna of Orange-Nassau (15 November 1746 - 29 December 1746). William V, Prince of Orange (8 March 1748 - 9 April 1806). In 1739 William inherited the estates formerly owned by the Nassau-Dillenburg branch of his family, and in 1743 he inherited those formerly owned by the Nassau-Siegen branch of his family. In April 1747 the French army entered Flanders, threatening the Netherlands, which was weakened by internal division.

The Dutch decided that their country needed a single strong executive, and turned to the House of Orange. William and his family moved from Leeuwarden to The Hague.

On 4 May 1747, the States General of the Netherlands named William General Stadtholder of all seven of the United Provinces of the Netherlands, and made the position hereditary for the first time. William first met Duke Louis Ernest of Brunswick-Lüneburg in 1747, and two years later appointed him field marshal of the Dutch States Army, which later led to Louis Ernest serving as one of the regents for William's heir. William IV was considered an attractive, educated, and accomplished prince in his prime. Although he had little experience in state affairs, William was at first popular with the people.

He stopped the practice of indirect taxation by which independent contractors managed to make large sums for themselves. Nevertheless, he was also a Director-General of the Dutch East India Company, and his alliance with the business class deepened while the disparity between rich and poor grew. William served as General Stadtholder of all the Netherlands until his death in 1751 at The Hague. The county of Orange, Virginia, and the city of Orangeburg, South Carolina, are named after him. The Kingdom of the Netherlands , commonly known as the Netherlands , is a sovereign state and constitutional monarchy with territory in western Europe and in the Caribbean.

The matter of fact is that any issues can be resolved, as reputation is most important to me. My goal is to provide superior products and quality of service. How and where do I learn more about collecting ancient coins? Visit the Guide on How to Use My Store. For on an overview about using my store, with additional information and links to all other parts of my store which may include educational information on topics you are looking for. The item "1751 NETHERLANDS William IV Prince Orange Silver Meda City of VEERE NGC i73304" is in sale since Wednesday, November 7, 2018. This item is in the category "Coins & Paper Money\Exonumia\Medals". The seller is "highrating_lowprice" and is located in Rego Park, New York. This item can be shipped worldwide.