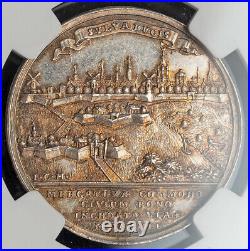 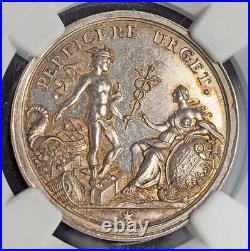 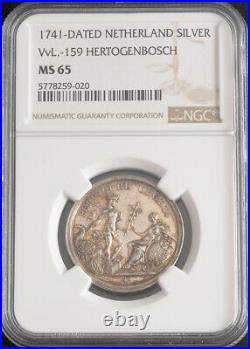 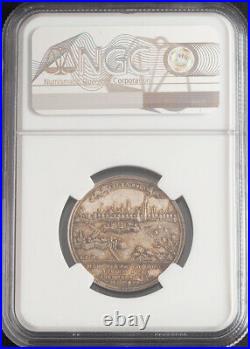 Mint Place: s-Hertogenbosch (North Brabant) Condition. Certified and graded by NGC as MS-65! On the completion of the new road to Eindhoven in 1741.

Diameter: 27mm Weight: 6.54gm Material: Silver. Obverse: Mercury, holding caduceus, standing on trade goods and pointing to cornucopia from which coins are pouring, while laaking to female personification of Den Bosch, which is leaning on coat-of-arms of the city. Star in exergue, latin phrase above. Reverse: Banner above cityscape of Den Bosch, depicted with high details such as windmills, churches and trees. In the foreground we can see the newly built and paved road to Eindhoven (which goes thru two fortified suburbs) to left and the river Dommel, on which a small sailboat is visible, benath which a farmer is mowing.

Legend: SVLVA DUCIS / MERATURAE COMMODO / I. / CIVIUM BONO INCHOATA VIA MDCCXLI. Is a major god in Roman religion and mythology, being one of the 12 Dii Consentes within the ancient Roman pantheon. He is the god of financial gain, commerce, eloquence, messages, communication (including divination), travelers, boundaries, luck, trickery and thieves; he also serves as the guide of souls to the underworld.

Colloquially known as Den Bosch , is a city and municipality in the Netherlands with a population of 152,968. It is the capital of the province of North Brabant. The city's official name is a contraction of the (archaic) Dutch. "The forest of the duke". The duke in question was Henry I of Brabant, whose family had owned a large estate at nearby Orthen for at least four centuries. He founded a new town located on some forested dunes in the middle of a marsh. At age 26, he granted's-Hertogenbosch city rights and the corresponding trade privileges in 1185. This is, however, the traditional date given by later chroniclers; the first mention in contemporaneous sources is 1196. The original charter has been lost. His reason for founding the city was to protect his own interests against encroachment from Gelre and Holland; from its first days, he conceived of the city as a fortress. It was destroyed in 1203 in a joint expedition of Gelre and Holland, but was soon rebuilt. Some remnants of the original city walls remain. In the late 14th century, a much larger wall was erected to protect the greatly expanded settled area. Artificial waterways were dug to serve as a city moat, through which the rivers Dommel and Aa were diverted. S-Hertogenbosch became the birthplace and home of one of the greatest painters of the northern Renaissance period, Hieronymus Bosch, The town suffered a catastrophic fire in 1463, which the then (approximately) 13-year-old Bosch probably witnessed; presumably, this fire provided inspiration for the fiery hell-scapes that would later make Bosch famous. Until 1520, the city flourished, becoming the second largest population centre in the territory of the present Netherlands, after Utrecht. The city was also a center of music, and composers, such as Jheronimus Clibano, received their training at its churches. Others held positions there: Matthaeus Pipelare was musical director at the Confraternity of Our Lady; and renowned Habsburg copyist and composer Pierre Alamire did much of his work at's-Hertogenbosch. The wars of the Reformation changed the course of the city's history. It became an independent bishopric. During the Eighty Years' War, the city took the side of the Habsburg (Catholic) authorities and thwarted a Calvinist coup. It was besieged several times by Prince Maurice of Orange, stadtholder of most of the Dutch Republic, who wanted to bring's-Hertogenbosch under the rule of the rebel United Provinces. The city was successfully defended by Claude de Berlaymont, also known as Haultpenne. In the years of Truce, before the renewed fighting after 1618, the fortifications were greatly expanded. The surrounding marshes made a siege of the conventional type impossible, and the fortress, deemed impregnable, was nicknamed the Marsh Dragon.

The town was nevertheless finally conquered by Frederik Hendrik of Orange in 1629 in a typically Dutch stratagem: he diverted the rivers Dommel and Aa, created a polder by constructing a forty-kilometre dyke and then pumped out the water by mills. After a siege of three months, the city had to surrenderan enormous blow to Habsburg geo-political strategy during the Thirty Years' War. This surrender cut the town off from the rest of the duchy and the area was treated by the Republic as an occupation zone without political liberties (see also Generality Lands). After the Peace of Westphalia, the fortifications were again expanded. The city held against the army of Louis XIV of France.

In 1794 French revolutionary troops under the command of Charles Pichegru attacked the city. It was only weakly defended, and fell after a short siege.

Pichegru then crossed the rivers and put an end to the Dutch Republic. In the Batavian Republic, that was established in 1795, both Catholics and. At last gained equal rights. From 1806, the city became part of the Kingdom of Holland and from 1810, it was incorporated into the First French Empire.

It was captured by the Prussians in 1814. The next year, 1815, when the United Kingdom of the Netherlands was established, it became the capital of North Brabant. Many newer and more modern fortresses were created in the vicinity of the city.

A new canal was built, the'Zuid-Willemsvaart', which gave the city an economic impulse. Trade, manufacturing and industry grew. Until 1878, it was forbidden to build outside the ramparts.

That led to overcrowding and the highest infant mortality in the kingdom. At the end of the 19th century, the very conservative city government prevented industrial investment to avoid an increase in the number of workers and the establishment of educational institutions: students were regarded as disorderly. As a result, the relative importance of the city diminished. The item "1741, Netherlands, s-Hertogenbosch. Silver Road to Eindhoven Medal. NGC MS-65" is in sale since Monday, March 1, 2021. This item is in the category "Coins & Paper Money\Coins\ World\Europe\Netherlands".