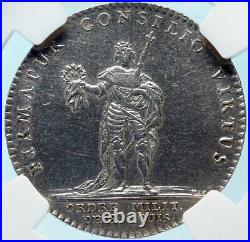 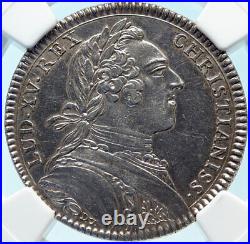 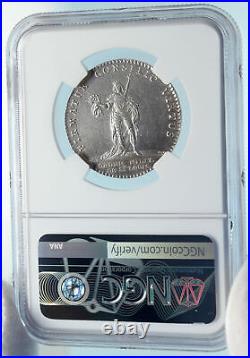 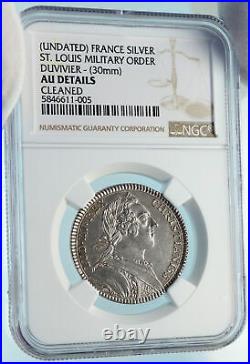 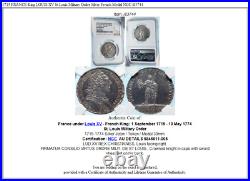 Crowned knight in cape with sword sheathed on his back. The Royal and Military Order of Saint Louis (French: Ordre Royal et Militaire de Saint-Louis) is a dynastic order of chivalry founded 5 April 1693 by King Louis XIV, named after Saint Louis (King Louis IX of France). It was intended as a reward for exceptional officers, notable as the first decoration that could be granted to non-nobles. By the authorities of the French Republic, it is considered a predecessor of the Legion of Honour, with which it shares the red ribbon (though the Legion of Honour is awarded to military personnel and civilians alike).

Although officially abolished by the government authorities of the July Revolution in 1830 following the French Revolution, its activities carried on as a dynastic order of the formerly sovereign royal family. As such, it is still recognised by the International Commission on Orders of Chivalry. The King was the Grand Master of the order, and the Dauphin was automatically a member as well. The Order had three classes. The entire order included 8 Grand Crosses, 28 Commanders and a variable number of Knights.

Officers of the Order included, after the Grand Master, a Trésorier (Treasurer), a Greffier (Registrar) and a Huissier (Gentleman Usher). The badge of the order consisted of a portrait of Saint Louis surrounded by the motto « LUD(OVICUS) M(AGNUS) IN(STITUIT) 1693 » ("Louis the Great instituted it in 1693").

The reverse features a sword interlaced with a laurel crown and a white sash, with the inscription « BELL(ICAE) VIRTUTIS PRAEM(IUM) » ("reward of wartime valour"). Knights wore the badge suspended from a ribbon on the breast, Commanders wore a red ribband (sash) over the right shoulder, and recipients of the Grand Cross wore the ribband as well as a star on the left breast. The general assembly of the Order was held annually on 25 August, the feast day of Saint Louis, in the residence of the King. Conditions for being inducted did not include nobility; however, Catholic faith was mandatory, as well as at least ten years' service as a commissioned officer in the Army or the Navy. Members of the Order received a pension. Hereditary nobility was granted to a knight's son and grandsons. Another decoration, the Institution of Military Merit (fr:Institution du mérite militaire) was created for the Protestant officers in service of the French king (mainly foreign mercenaries, as French Protestants were not tolerated at the time).

Until the death of Louis XIV, the medal was awarded to outstanding officers only, but it gradually came to be an award that most officers would receive during their career. On 1 January 1791, during the French Revolution, a decree changed the name to décoration militaire ("military decoration"). It was subsequently withdrawn on 15 October 1792.

One of the first acts of Louis XVIII was to reinstate the Order of Saint Louis, using it to award officers of the Royal and Imperial armies alike. In 1830 the new king Louis-Philippe abolished the order, which was never reinstated. Decree by His Majesty the King Louis XIV of France.

Louis, by the grace of God King of France and Navarre, to all present and yet to come, hail. We have decided that only officers still serving in our troops shall be introduced and that virtue, merit and distinguished service in our armies shall be the only criteria to enter. Louis XV (15 February 1710 - 10 May 1774), known as Louis the Beloved , was a monarch of the House of Bourbon who ruled as King of France from 1 September 1715 until his death in 1774.

He succeeded his great-grandfather Louis XIV at the age of five. Until he reached maturity (then defined as his 13th birthday) on 15 February 1723, the kingdom was ruled by Philippe II, Duke of Orleans, as Regent of France. Cardinal Fleury was his chief minister from 1726 until the Cardinal's death in 1743, at which time the young king took sole control of the kingdom.

He ceded New France in North America to Spain and Great Britain at the conclusion of the disastrous Seven Years' War in 1763. He incorporated the territories of the Duchy of Lorraine and the Corsican Republic into the Kingdom of France. He was succeeded in 1774 by his grandson Louis XVI, who was executed by guillotine during the French Revolution.

Two of his other grandsons, Louis XVIII and Charles X, occupied the throne of France after the fall of Napoleon I. Historians generally give his reign very low marks, especially as wars drained the treasury and set the stage for the governmental collapse and French Revolution in the 1780s. Jetons or jettons are tokens or coin-like medals produced across Europe from the 13th through the 17th centuries. They were produced as counters for use in calculation on a counting board, a lined board similar to an abacus. Thousands of different jetons exist, mostly of religious and educational designs, as well as portraits, the last of which most resemble coinage, somewhat similar to modern, non-circulation commemorative coins.

The spelling "jeton" is from the French; the English spell it "jetton". France, officially the French Republic (French: République française), is a sovereign state comprising territory in western Europe and several overseas regions and territories.

France became Europe's dominant cultural, political, and military power under Louis XIV. French philosophers played a key role in the Age of Enlightenment during the 18th century. In 1778, France became the first and the main ally of the new United States in the American Revolutionary War. In the late 18th century, the absolute monarchy was overthrown in the French Revolution.

Among its legacies was the Declaration of the Rights of Man and of the Citizen, one of the earliest documents on human rights, which expresses the nation's ideals to this day. France became one of modern history's earliest republics until Napoleon took power and launched the First French Empire in 1804. Fighting against a complex set of coalitions during the Napoleonic Wars, he dominated European affairs for over a decade and had a long-lasting impact on Western culture.

Following the collapse of the Empire, France endured a tumultuous succession of governments: the monarchy was restored, it was replaced in 1830 by a constitutional monarchy, then briefly by a Second Republic, and then by a Second Empire, until a more lasting French Third Republic was established in 1870. By the 1905 law, France adopted a strict form of secularism, called laïcité, which has become an important federative principle in the modern French society. France reached its territorial height during the 19th and early 20th centuries, when it ultimately possessed the second-largest colonial empire in the world. In World War I, France was one of the main winners as part of the Triple Entente alliance fighting against the Central Powers. France was also one of the Allied Powers in World War II, but came under occupation by the Axis Powers in 1940.

Following liberation in 1944, a Fourth Republic was established and later dissolved in the course of the Algerian War. The Fifth Republic, led by Charles de Gaulle, was formed in 1958 and remains to this day. Following World War II, most of the empire became decolonized.

Throughout its long history, France has been a leading global center of culture, making significant contributions to art, science, and philosophy. It hosts Europe's third-largest number of cultural UNESCO World Heritage Sites (after Italy and Spain) and receives around 83 million foreign tourists annually, the most of any country in the world. France remains a great power with significant cultural, economic, military, and political influence. It is a developed country with the world's sixth-largest economy by nominal GDP and eight-largest by purchasing power parity. According to Credit Suisse, France is the fourth wealthiest nation in the world in terms of aggregate household wealth. It also possesses the world's second-largest exclusive economic zone (EEZ), covering 11,035,000 square kilometres (4,261,000 sq mi). French citizens enjoy a high standard of living, and the country performs well in international rankings of education, health care, life expectancy, civil liberties, and human development. France is a founding member of the United Nations, where it serves as one of the five permanent members of the UN Security Council. It is a member of the Group of 7, North Atlantic Treaty Organization (NATO), Organisation for Economic Co-operation and Development (OECD), the World Trade Organization (WTO), and La Francophonie. France is a founding and leading member state of the European Union (EU). World-renowned expert numismatist, enthusiast, author and dealer in authentic ancient Greek, ancient Roman, ancient Byzantine, world coins & more. Ilya Zlobin is an independent individual who has a passion for coin collecting, research and understanding the importance of the historical context and significance all coins and objects represent. Send me a message about this and I can update your invoice should you want this method. Getting your order to you, quickly and securely is a top priority and is taken seriously here.