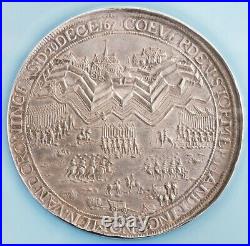 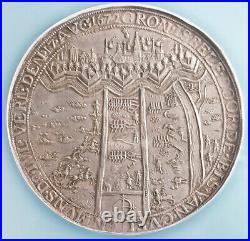 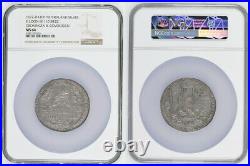 Obverse: Bird-eye view of the besieged city of Groningen and its fortifications. Burning cannonbals are flying above the buildings, cavalry and infantry troops in front of the city walls, and also the Winschoterdiep canal depicted with fine deails. Groningen was besieged by the Archbishop of Cologne and the Bishop of Münster on the 9th of July and relieved on the 17th of August, 1672.

Reverse: Crowned double-headed eagle of Sicily with coat-of-arms of Nola at chest above in scription in six lines and date (1864). List of the communes, which honor the administrator around. Coevorden taken by assault on the 20th of December. The Siege of Groningen was a battle that took place in 1672 during the Franco-Dutch war.

It was a Dutch victory that ended all hope of the Bishop of Münster to push deeper into the Netherlands. The Münster army was so weakened by the defeat that the Dutch army successfully reconquered much of the land that Münster had conquered just weeks earlier. Every year, the city of Groningen celebrates its victory as a local holiday on 28 August. The 1672 to 1678 Franco-Dutch War , also known as the Dutch War French. , was fought primarily between France and the Dutch Republic, supported by the Holy Roman Empire, Spain, Brandenburg-Prussia and Denmark-Norway. French allies included Münster and Cologne until 1673, as well as England which left the conflict in 1674, then re-entered it in February 1678 on the side of the Dutch. The war began in May 1672 when France nearly overran the Dutch Republic, an event still known as the. Their advance was halted by the IJssel Line in June and by late July the Dutch position had stabilised. Concern over French gains led to a formal alliance in August 1673 between the Dutch, Emperor Leopold I, Spain and Brandenburg-Prussia. They were joined by Lorraine and DenmarkNorway, while England made peace in February 1674. Now facing a war on multiple fronts, the French withdrew from the Dutch Republic, retaining only Grave and Maastricht. Louis XIV refocused on the Spanish Netherlands and Rhineland, while the Allies led by William of Orange sought to limit French gains. After 1674, the French occupied Franche-Comté and areas along their border with the Spanish Netherlands and in Alsace, but neither side was able to achieve a decisive victory. The war ended with the September 1678 Peace of Nijmegen; although the terms were far less generous than those available in June 1672, it is often considered the high point of French military success under Louis XIV and provided him a significant propaganda success.

Spain recovered Charleroi from France but ceded Franche-Comté, as well as much of Artois and Hainaut, establishing borders that remain largely unchanged. The return of Maastricht meant the Dutch had regained all the territory lost in the disastrous early stages, a success that secured William of Orange a leading role in domestic politics. This helped him counter the threat posed by continued French expansion and thus create the 1688 Grand Alliance that fought in the Nine Years War. The item "1672, Dutch Republic.

Silver Siege of Groningen & Coevorden Medal. NGC MS-64" is in sale since Friday, September 17, 2021. This item is in the category "Coins & Paper Money\Coins\ World\Europe\Netherlands". The seller is "coinworldtv" and is located in Wien. This item can be shipped worldwide.